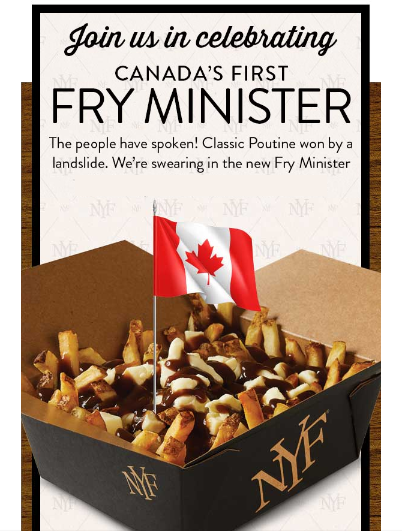 During the election, New York Fries marked the occasion by holding an election, asking Fry Society members to vote for the candidate they feel would make the ideal Fry Minister. Now, that is an election I can get involved in. They were three candidates running for the positon of Fry Minister: Bacon Double CheeseVeggie FriesClassic Poutine The polls closed on October 20th at 5pm.And the results are in! The people have spoken and the Classic Poutine won by a landslide. Proper thing! With 54% of the vote, CP has a clear majority and receive twice as many votes as Bacon Double Cheese. Finishing 3rd, unable to crack the 20% bar, is Veggie Fries. So now that one election is settled, you can pick up a Classic Poutine, your new Fry Minister, and watch the results coming in tonight!