Contrary to our layover on our way to Phoenix which lasted about 20 minutes while running through terminals, we had about two hours at the Philadelphia airport on our way back home. This meant we would be able to get some lunch and hopefully relax a little.

We had to take the shuttle from Terminal A to Terminal F. Terminal F at the Philadelphia airport is for small commuter flights and has recently been renovated. The chief benefit is, apparently, better food options. Once you get off the shuttle and enter Terminal F, you are faced with two general options: either choose one of the spots in the Food Court (From left to right: Sbarro, Far East, Smash Burger, Red Mango, Philly Pretzel Factory, Le Bus Café, Chipotle, Tony Luke’s, Au Bon Pain) or sit down in something that looks like an actual restaurant, the Local Tavern. And that’s where we ended up. 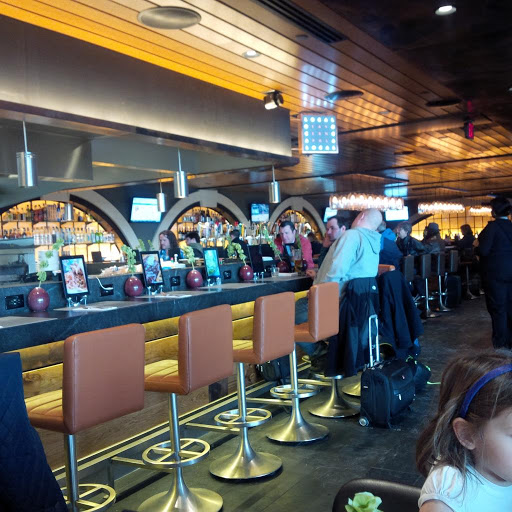 The Local Tavern is meant to be the upscale option for travellers. Local chef Jose Garces created the menu.

There are iPads at each seat. The Tavern is designed to feel modern and hip. You can see a multitude of bar taps behind the counter, and the kitchen is open concept.

The restaurant is not as brightly lit as the food court, and the open kitchen is humming behind, sometimes even covering the noise of the different airport alarms and announcements one can hear. One particular door seemed to be ringing constantly, loudly, and didn’t seem happy. 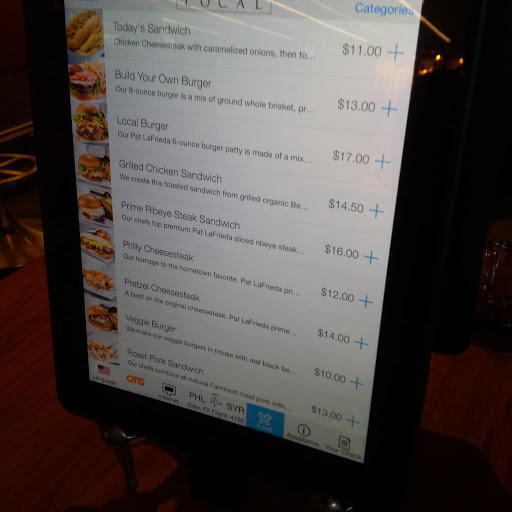 The menu is on the Ipads and you use the tablet to order. Local claims you will be served in 15 minutes or less, a targeted message to travellers in a hurry stating that they’ll be out the door in reasonable time.

Since you pay right when ordering, you eat and go. That said, since you have to pay ahead you also have have to tip ahead of time. The user interface gives 18% as the default – I’m not a big fan of tipping ahead of time, I admit.

Staff helpfully showed us how to navigate through the different pages – it is a bit of a pain to do so. Still, we managed to select our food and drinks. The beer list is incredible for an airport bar, over 60 on tap. I ordered a pint of Yard’s Brawler, always keen to try local brews. Mel went with a Yuengling.

Sadly, when the wait staff came over with our drinks, they announced that they were out of Brawler. I asked them to bring me another local equivalent, not wanting to waste more time going through the menu. They ended up bringing me a Yuengling. How original. Certainly, it is not local, and it is not equivalent, as they had to give me 2$ back – something I had to flag with surgical precision.

We thought we would have a bit of a quiet time, with kids enjoying their own iPads and not fighting over the one we own. Locals helpfully allows users to surf the Internet, watch some videos, check the weather and even register your flight so you can get updates right at your seat. How helpful! But there is a catch: after a few minutes of not being played with, the iPad asks you if you need more time. If you are distracted at that moment and you miss it, the iPad goes dormant and you have to start all over again. Not very helpful if you are trying to eat at the same time, defeating the whole purpose of registering your flight. So we had to reset the kids video a few times during the period we were there. 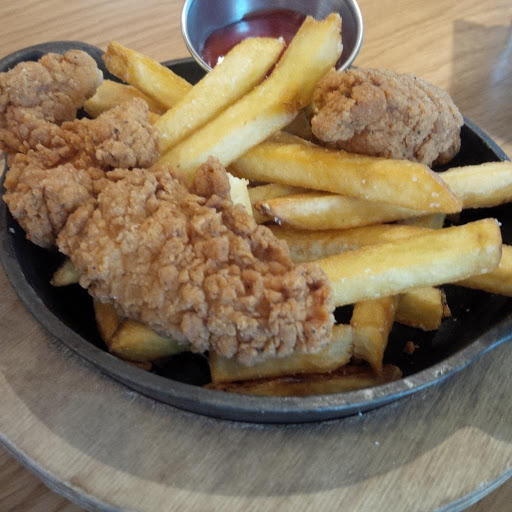 The food did arrive promptly.

Both kids had ordered the chicken filets with fries. Even though it was ordered from the kids’ menu, it was served in a hot skillet. That needs to be rethought, I would argue.

The chicken had a tasty breading, a tad salty, nicely crunchy; and the filets, from the breast, were quite tender.

The kids seemed to like them, but they liked the fries better. I’m not sure why, they were a little too salty and were not very fluffy.

And, of course, we had to remind the kids to eat and not just focus on Paw Patrol and Mickey Mouse. 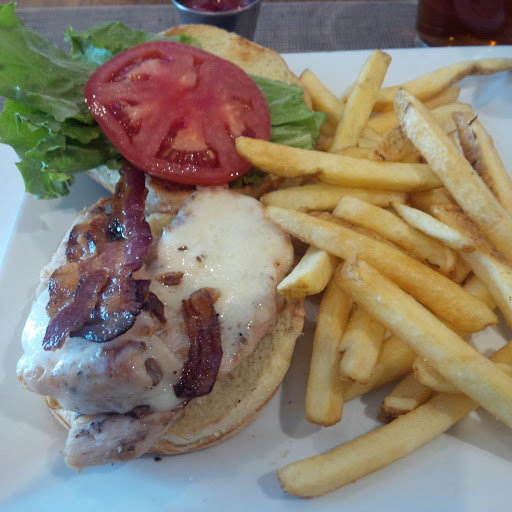 An organic chicken breast, topped with cheese and bacon, garnished with a slice of tomato and a leaf of lettuce, served on a toasted bun.

The produce were fresh but were sadly set on the top bun.

On the bottom bun, a nice, thick grilled chicken breast. The meat was a on the overdone side, and was a little dry unfortunately.

On top of the breast, melted cheese and two slices of bacon. Once again, it looked kind of sad. I do get that they are working quick to get the food out, but it wouldn’t take too much time to work on the presentation a little.

The sandwich itself was bland and boring. It could have used a spicy mayo or something.

For my part, since I was in Philadelphia, I decided that I had no choice but to opt for the classic Philly Cheesesteak. 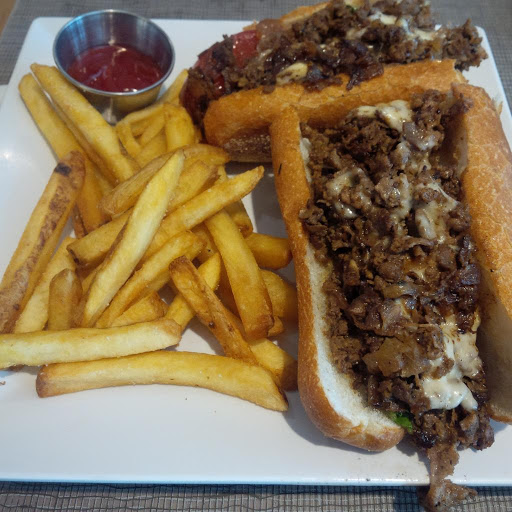 I didn’t regret going down that road.

The meat, thin-cut prime rib from Pat LaFrieda, http://www.lafrieda.com/, the great meat purveyor established in Brooklyn in 1922, was tender, meaty, juicy and delicious. Fried onions were adding a hint of sweetness and pungency to the mix.

As a cheese, I had to choose between Cheese Whiz, Cheddar or Provolone. You won’t be surprised that I went with the Italian – of course, it being the original cheese for this Son of Philadelphia.

I double guessed my choice of Provolone, however. Since it is the better cheese, they probably go easy on it: I thought there could have been more, as a lot of it seemed to have simply evaporated! I mean, you want your cheesesteak to be cheesy – that’s the whole point! That said, flavor wise, I liked the sharpness provided by the Provolone.

I had asked for my cheesesteak to be served “hoagie style”, with tomatoes and lettuce, because we all need our vegetables.

All of it was served on a tasty long soft roll, slightly salted and with a little bit of corn meal on the bottom for extra crunch. Very nice.

Of all the things we were served at the Local Tavern, this was definitely the highlight.

I would have ordered another beer, but since we had already paid, and didn’t feel like going through that process again, I abstained. That said, the staff was nice and personable, and helpful whenever needed. I like the idea of the iPad, but the interface could be simpler and if you have questions, well, at least they still have staff to answer them! The place is overpriced, but hey, it’s an airport!