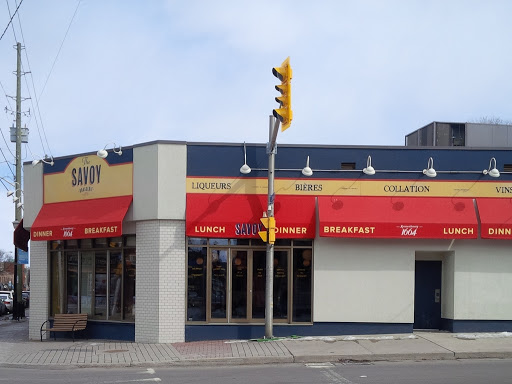 The Savoy opened about two years ago The Savoy opened about two years ago and has been a popular destination in Westboro. It is the brasserie-soeur of The Metropolitain. Owned by the same group, along with the Empire Grill and The Grand Pizzeria and Bar, it is located where the Westboro iconic, Moe’s World Famous Newport Restaurant (and Ottawa’s Elvis Sighting Society) was established for 25 years.

With big windows, high ceilings and ceramic floors, the spot has undergone significant renovations to become a French Brasserie. It also now showcases a mile-long zinc-topped bar. Large mirrors around the room make the space look even more spacious.

It was quiet during lunch time which made for a great, personalized and efficient service.

The menu is quite similar to The Met, but somewhat less expensive. Of course, The Savoy’s executive chef is Mike Poliquin – same as its brasserie-soeur, so the logic is the same. At lunch, you’ll find classics such as French Onion Soup, Beef or Salmon Tartare, Escargot Pernod, Moules et Frites, Niçoise Salad, Croque Monsieur and Croque Madame, Bouillabaisse, Steak Frites, Duck Confit and Beef Bourguignon. The raw bar features Oysters, Shrimp Cocktail and Ceviche.

Despite that, we ignored the regular menu and both went for one of the daily sandwich features, offered with a glass of house wine.

Today’s special was a Seafood Sandwich, with Scallops, Calamari, Lobster, Salmon and Halibut, served on a toasted roll and garnished with a remoulade and a red cabbage slaw.

How not to resist to the call of the sea? 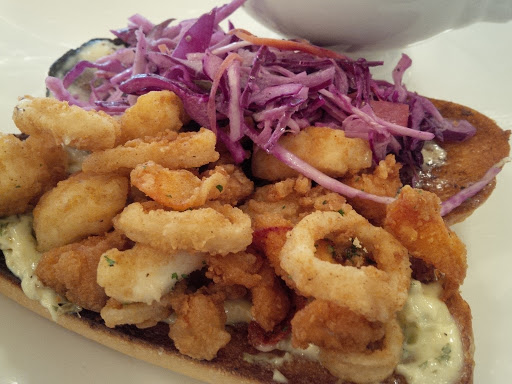 This was a big sandwich. There was loads of seafood (loads!) and everything was cooked perfectly. Nothing chewy, which is always a danger with fried seafood. The breading was solidly attached to the pieces, making eating them pleasant.

They also sprinkled a bit of parsley for a hint of freshness. The remoulade was a good condiment for the sandwich – a healthy spread with a hint of acidity. Textural depth was offered by the slaw, fresh, crispy, not dripping with dressing. 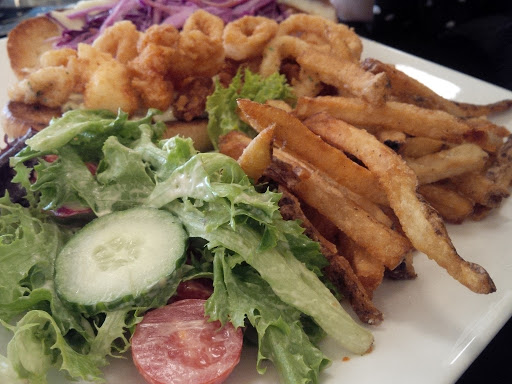 To go with the sandwich, we could go for the soup of the day, a salad or French fries.

We ended up splitting the difference, as I selected the White Bean Soup while my friend went for half-salad, half fries.

When the plates arrived, it felt like she got a full portion of both.

The salad was simple, some frisée with cucumbers and tomatoes with a simple dressing. 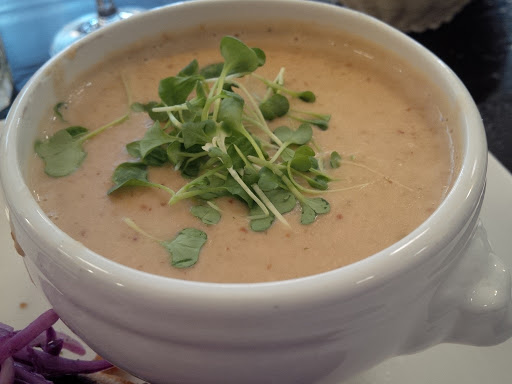 The soup was deep, rich, creamy.

Lots of flavour levels with a tad of saltiness, it had a pleasant thick texture, this was not a simple consommé.

The soup, garnished with some cressons, was a warm and comforting concoction, perfect for this winter that never ends.

As you can imagine, it was very filling. 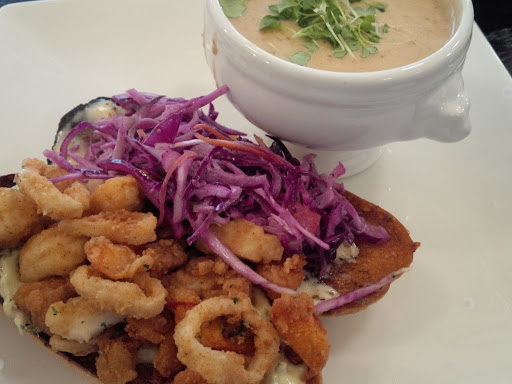 Even though I had resisted the French Fries in favour of “much more healthy” soup, I was allowed to sample them as my partner in crime forced me to indulge – there was simply too much for her.

The fries were not quite french frites, but they tasted very good.

They were crisp on the outside and very fluffy inside, and were salted properly. Solid fries.

Overall, this was a pleasant experience. You wouldn’t think you were in Paris, but the French-style atmosphere was certainly felt.

I had heard complaints of slow service and loudness, but neither was to be found today.

On the contrary, it was a relaxing – and delicious – lunch.