I showed up for my lunch meeting at the 3 Brewers, as suggested by Richard.

The place was busy but not overcrowded.

The server informed us that unfortunately, they were down a deep fryer and that some items were not available, specifically the fish and chips – no fish frying today in order to avoid cross-contamination to protect their fish-allergic customers.

I was totally taken aback by the news because, obviously, the Fish and Chips is totally what one should get at a French Brewery.

I peered at the menu carefully. I regularly get the Flammekueche, but I didn’t feel like it today.

I considered the Cassoulet, but thought it would be too heavy. I ignored the Burgers and the Poutine section, because as usual I was focused on my health.

Our server came back to take our orders.

Richard ordered the Fish and Chips. He had to be reminded he couldn’t get it, sadly. So he went for a Flamme.

I hesitated, apologized and informed our server that I had changed my mind: I would have the Fish and Chips, too.

Nevermind, I’ll have the California Chicken with a side Garden Salad. No Fish? No Chips! I thought.

The food arrived pretty fast, our dishes being simple enough.

The California Chicken is one of the six 3 Brewers signature sandwiches. At delivery time, the staffer called it the Chicken Burger, as it is what it looks like. 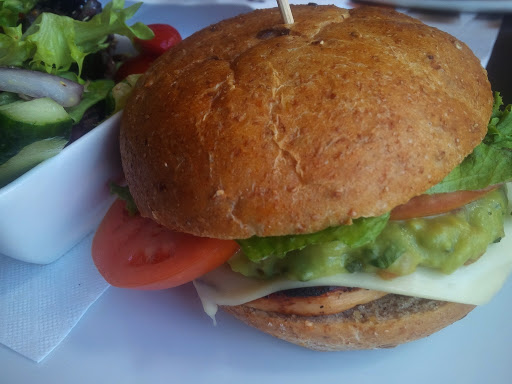 A grilled chicken breast, topped with Swiss cheese and house made guacamole, served on a toasted multigrain bun.

Not sure what is Californian about Swiss cheese, but there you have it.

Avocado, though, Californian for sure. Though considering the drought in California, that might become less of a truism. 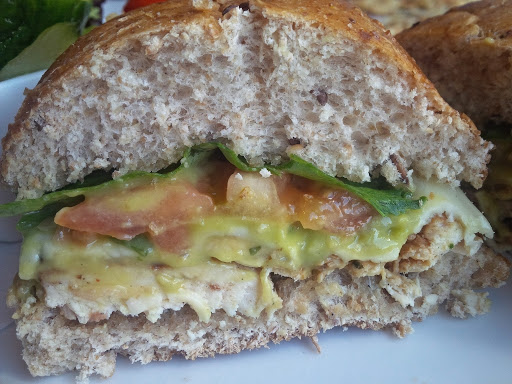 Now, this is not a bad sandwich. The creamy guacamole is what makes it. Both pleasant and messy. However, the chicken breast was quite small, a little under seasoned. The tomatoes not being fully in season yet, were a bit pale but at least texturally sound. The Swiss cheese was slightly melted, melding into the mix.

The multigrain bun was fairly thick, of good quality, but the ratio of carb/protein was a bit off in my opinion.

Still, it made for a light sandwich, and with a side Garden Salad, I had a light lunch, as per my habit.