Skip to content
Home Restaurant How the mighty have fallen

How the mighty have fallen

I used to go to Local Heroes regularly after sporting events, wither hockey or softball. My usual location was on Bank St. It was a neat spot filled with paraphernalia and lots of TVs.

Founded in 1981 by former Ottawa Rough Rider Mark Kosmos, Local Heroes Sports Bar & Grill became popular for selling chicken wings by the pound, one of the first spot to do so in Ottawa. It dubbed itself the “King of Wings and Ribs”. It expanded across the National Capital region, opening locations on Clyde Avenue, Bank Street, and Carling Avenue in Kanata. Another wave of locations were opened a few years later, at Bells Corners, on St. Laurent Boulevard, in Stittsville and at Scotia Bank Place.

But competition is tough, and most of the Local Heroes have now fallen, the Bank street location going under in May 2013. Hometown has now settled in that location. 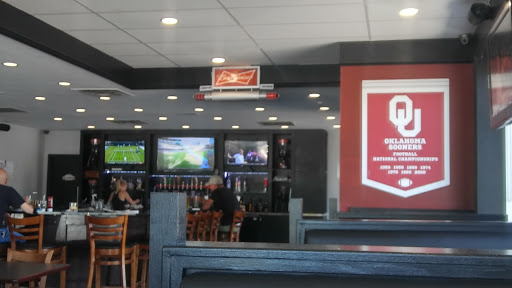 This is where we ended up coming back from Camp Mammy and Papy as the kids were requesting Chicken Wings for lunch. The King might no longer be King, but surely their wings would still be good.

The restaurant is located in an old Pizza Hut. You could drive by and not notice it – there is only a little sign on the strip mall billboard. The restaurant itself has no banners or signs. The place was empty, which is not really surprising I suppose on a Holiday Monday. Inside, the decor is minimalist. A few items about the Oklahoma Sooners and “Boomer Sooner” stickers can be found, including a big sign reminding customers of the Sooners National Championships.  You know, in case you forgot. It is a very open concept, with booths along the walls and a few tables in the middle. You could imagine the place potentially coming to life for a big game. This, in all likelihood, wouldn’t involve the Sooners.

According to their website, when Local Heroes founder Mark Kosmos went back to Oklahoma for their 45th reunion, he found his newest idea to bring home to Ottawa: an old restaurant next to the Oklahoma stadium, which made fresh tacos by hand every day and slow-cooked their beef for two days. Mark loved these tacos and was told that the secret was that Tortillas had to be fresh every day and never frozen.  Local Heroes Oklahoma Edition featuring homemade Tacos!

Except that no Tacos are to be found on the menu. Still, their house made tortillas are featured in a couple of dishes: Quesadillas, Fajitas and the Buffalo Chicken Wrap. The wrap is what Ms. Waffle ordered, with Fries. I settled for the Peppercorn Burger with a garden salad.

As for the kids, the boy wanted BBQ sauce on his wings, so we ordered the mild wings. the girl prefers her wings plain, no sauce. Our waitress asked if we wanted any dip for the wings- I said sure, they like sour cream – the wings are coming with some veggie sticks?  She apologized and said that because of the long weekend, their vegetable order had not come in. This left me pondering about the freshness of my upcoming salad.

The kids’ food came fast.  The wings were served on a nice big piece of lettuce, but that apparently wasn’t to the liking of our kids. Clara started to remove the leaf, which prompter our waitress to remove it for her. Seeing this as an authorized option, Oscar started to make noises meaning “me too” which lead to the prompt lettuce removal services. 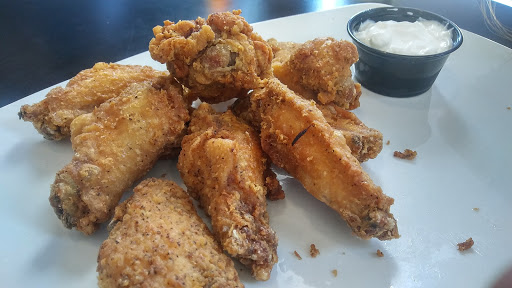 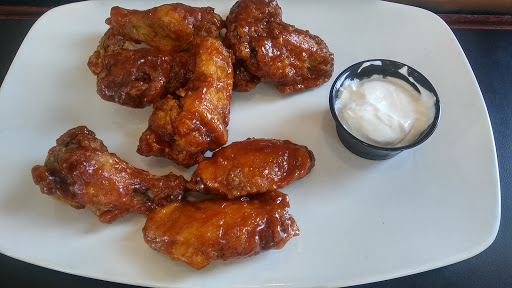 They both dug in. The boy quickly had BBQ sauce all over his face. He clearly was enjoying them. Despite the facial evidence, there was not too much sauce. The wings were meaty and crispy. The girl was also enjoying her wings. Plain is her thing, but somehow decided that a little ketchup on the side would go a long way. She would dip her wings in it and her fingers in the sour cream. We suggested it would be more appropriate to dip her wings in the sour cream, so she asked for a spoon. She reluctantly dipped a chicken wing, then some French fries, and quickly came to the conclusion that sour cream only tasted good on fingers. 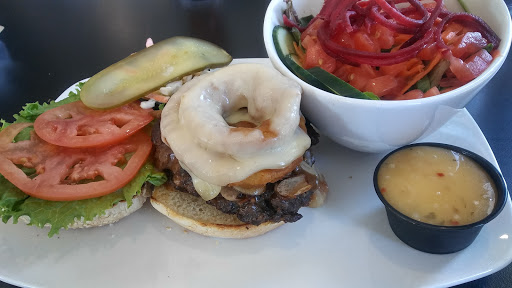 Ms. Waffle is the one who suggested I order the Peppercorn Burger. “Peppercorn and Beef naturally go together,” she said. And she’s right.

We washed everything down with some Goose Island Honkers Ale. Except for the kids, of course, for whom juice was the way to go. 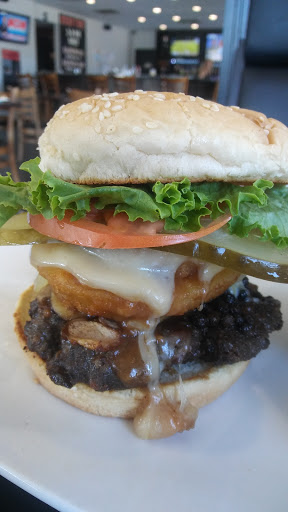 This was a pretty darn tasty burger. Hand-made patty with a nice char on the meat and the great freshy zingness from the peppercorn. Salty, hearty gravy, but not too much.

Despite the moisture from the gravy and the melted cheese, the onion rings were still crunchy and delicious. Veggie toppings were fresh and crispy.

The salad was a mix of greens, shaved beets and carrots, tomatoes and cucumbers. I had the Italian dressing to go along, an industrial concoction. If it was nice to see the root vegetables in there, the lettuce had seen better days.

Ms. Waffle’s wrap was just ok, according to her. But she didn’t save a bite for me to sample!

Overall, the place looked a little sad, but according to pictures around the place, it gets lively when there is a game on. Except when the Sooners are playing.