Skip to content
Home Golf The Kitchen is open

The Kitchen is open

We’ve been going on a golf trip to Alexandria Bay, NY, for over a decade now.

We have our habits. We’ve tried a few places. And considering the size of the place, it is pretty rare that we even try to discover something new.

On Friday night, a few guys were going to go to Cavallario’s Top Of The Bay to munch on Burritos and quaff some A-Bombs.

But Turk and I didn’t really feel like it. We searched the area for something different, something fresh.

And we found The Kitchen. 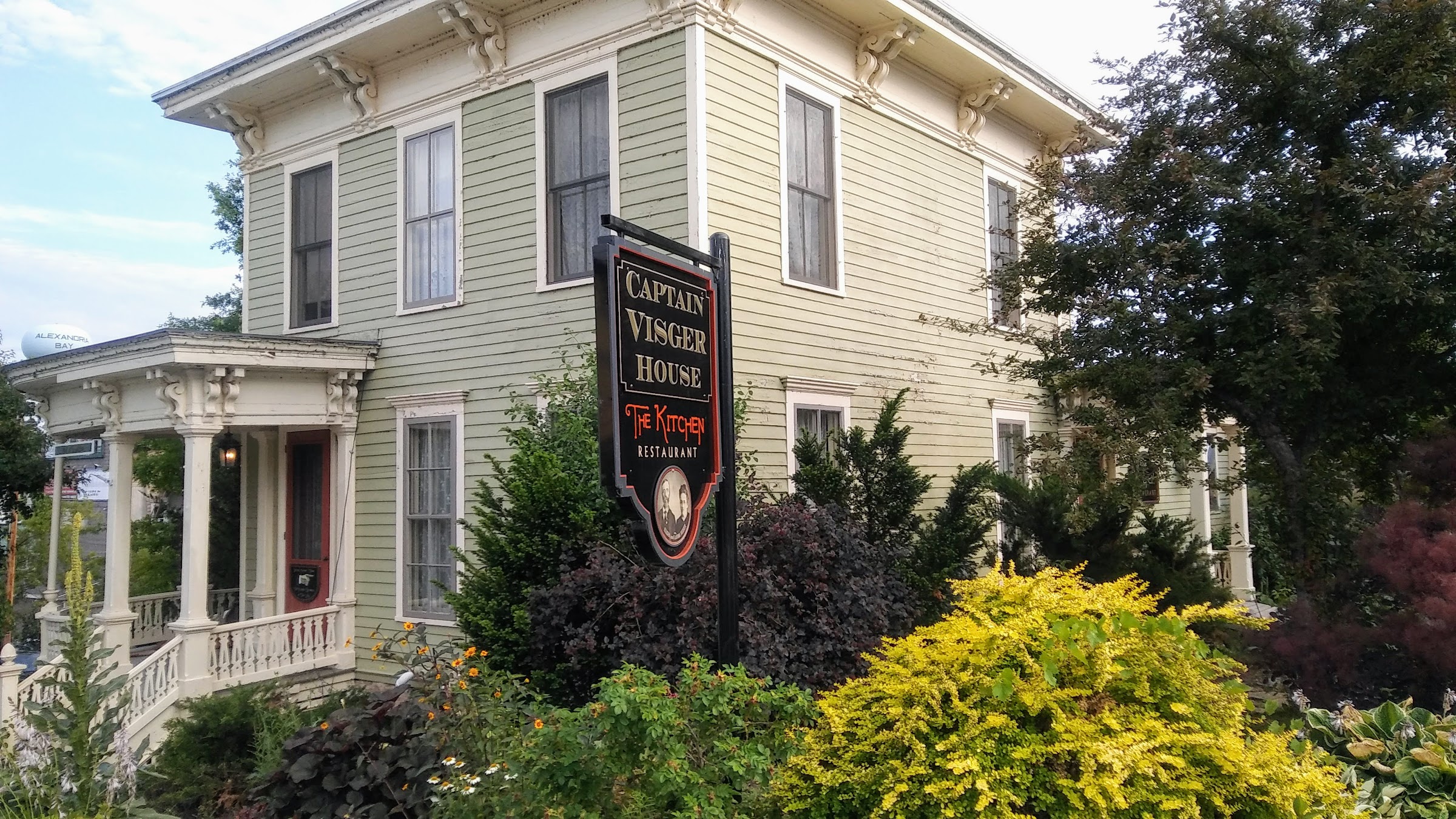 We went on a reconnaissance mission, to assess the location, the menu and available space. At the gate, a friendly greeter happily answered our questions and gave us a quick tour.

The Kitchen is located in The Captain Visger House, a beautifully renovated bed and breakfast, it is a Victorian house located in the heart of town, right across from the hospital. Captain Elisha W. Visger was the creator of the first 1000 island tours and lived in this house.

The Kitchen was becoming the newest entry in the A-Bay food tour.

We went back to The Ship and rallied a few sailors for this new culinary adventure.

The menu is said to shift weekly, based on what is seasonally and locally available. Today’s menu featured hearty American dishes, with an influence from French, Italian, and Californian cuisine. The cocktail menu is creative and immediately attracted our attention. It featured a mixology favouring regional ingredients and bold flavors. 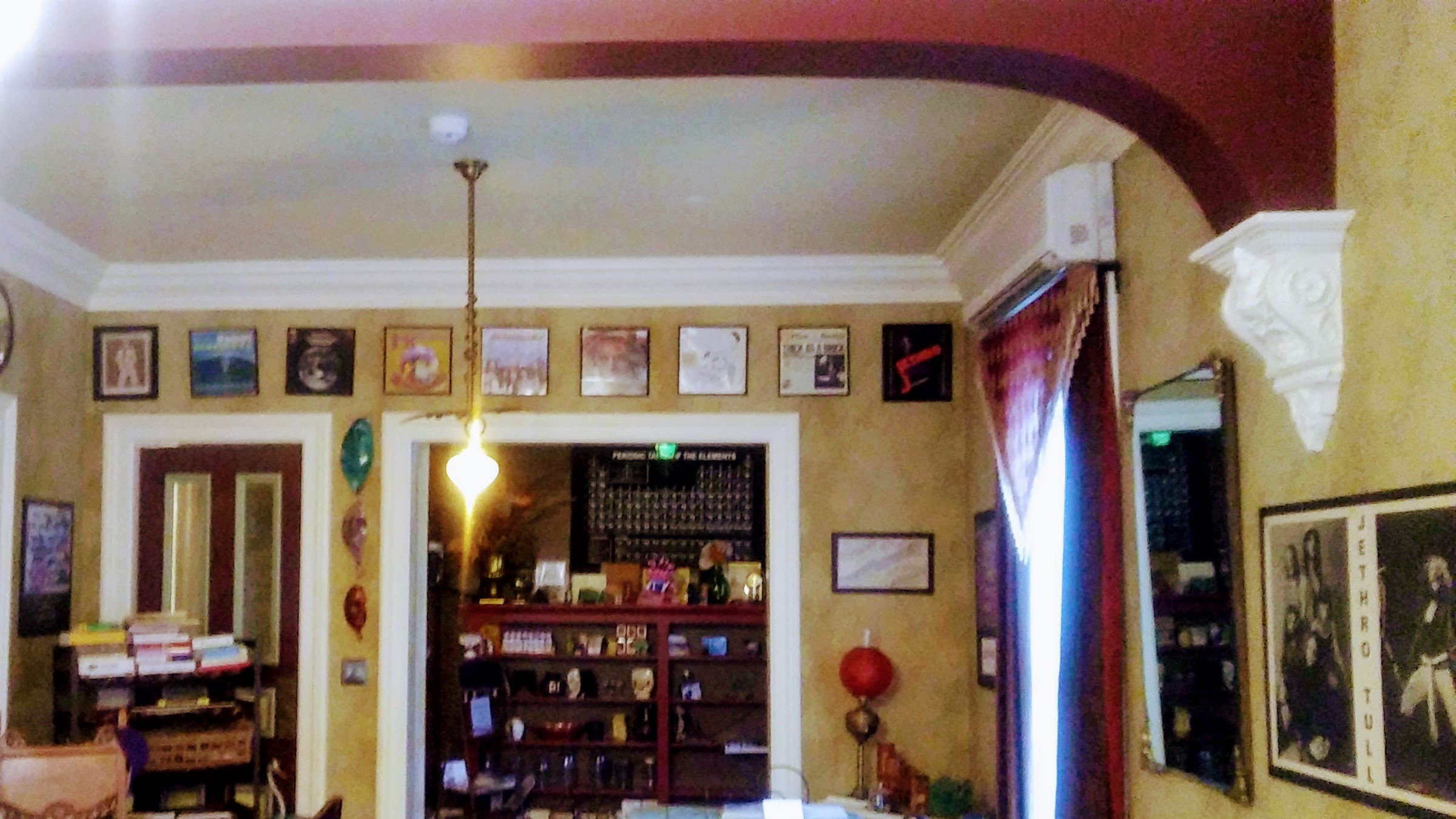 Inside, the decor is eclectic. Rustic and classic, antique and modern, ba-rock and pop, replete with old album covers and in particular, shoutouts to Jethro Tull

We sat at one end of the restaurant – every other customer was on the patio, but we had had enough heat for the day after labouring on the golf course.

We ordered a round of drinks. I went for their Bloody Bay, a Caesar made with an artisanal clamato made with crab, shrimp and lobster, with old bay spices and horseradish.

All drinks were great, especially the Bloody Bay. Zesty, tangy, spicy; deep, bold flavours for a refreshing drink, garnished with a spicy garlic green bean. Probably the best Caesar I’ve ever had.

“A must have,” Ken said of the Bloody Bay. “Made with a melody of seafood bisque, it is without a doubt, one of the best drinks you will ever let wet your lips. ”

We had to ask for Jeanine, The Kitchen’s mixologist, to come over to congratulate and thank her – and try to pry some of her secrets from her. She didn’t bite.

The menu also didn’t let us down.

Different items were ordered by the boys.

The Perch, locally sourced, lightly dusted and fried. It was served with, what else, a Housemade 1000 island dressing.  Lighter than calamari, nice crispiness, not greasy at all.

The Shiitake Bruschetta, a Mushroom topping mixed with thyme, red onion and a mild gorgonzola sauce. 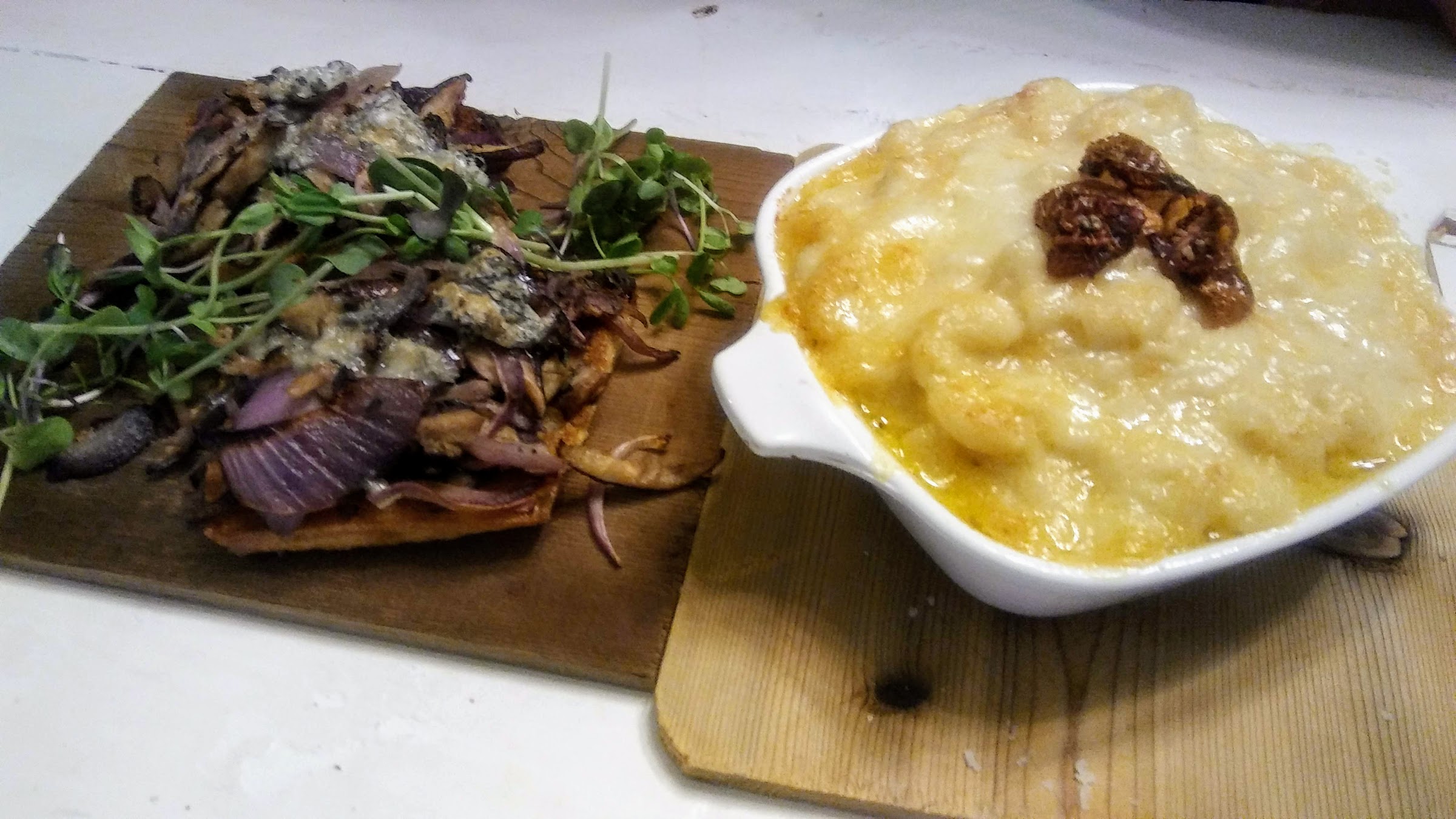 The beet salad, a generous portion of beets mixed with a blend of greens, tossed with a maple vinaigrette and topped with goat cheese and roasted pumpkin seeds. Filling, nutritious and colourful. Considering the size of the small portion, half of which was packed to go, I would recommend avoiding the large portion, even if sharing it.

The House Made Pasta, tender, silky papardelle, served with a rich roasted tomato sauce, with home made pesto and lots of Parmesan. 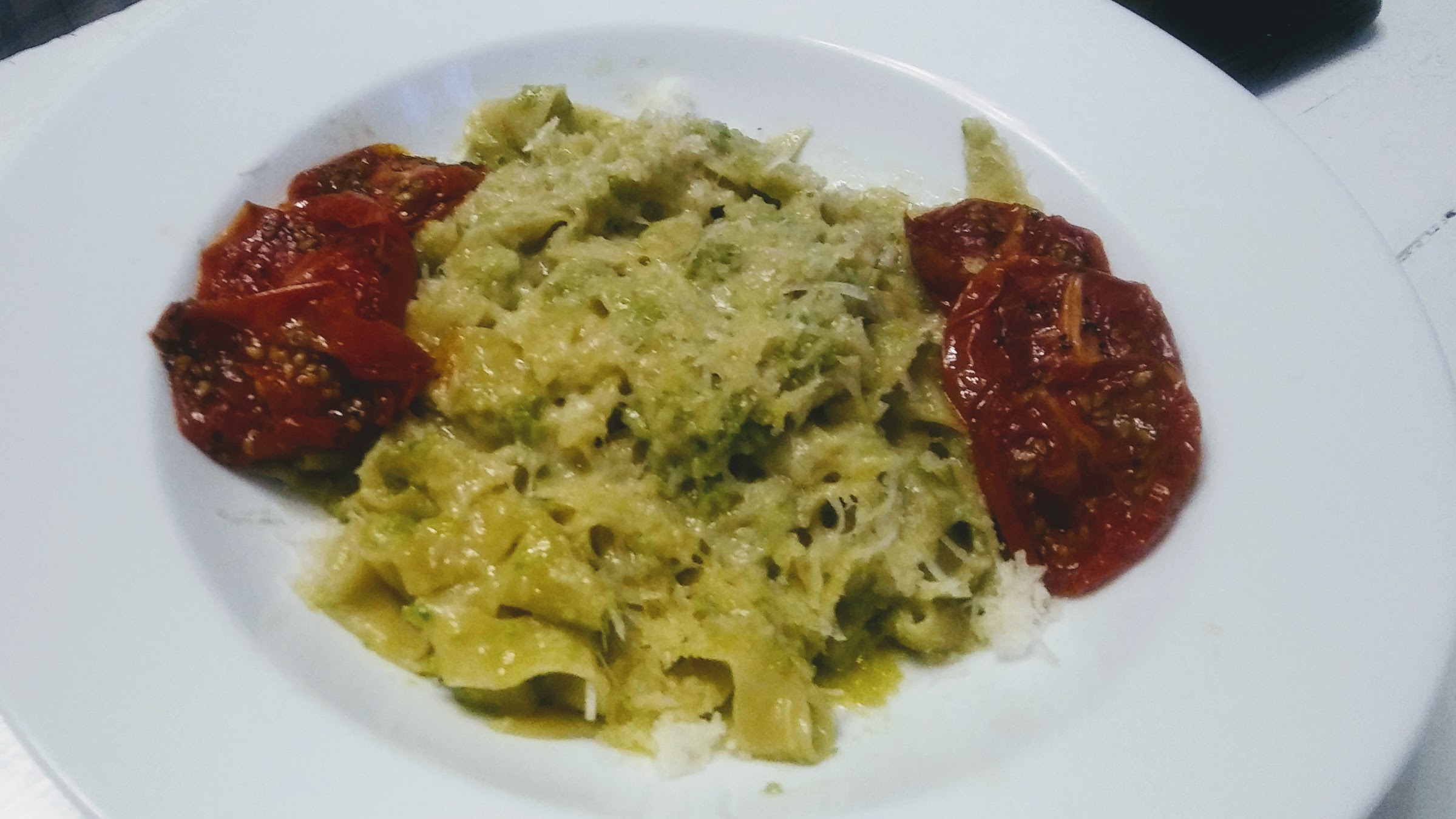 For my part, I ordered the Meatballs with the Utica Greens.  Even though one is meant to be an appetizer and the other an entree, you would be hard pressed to know which was which. 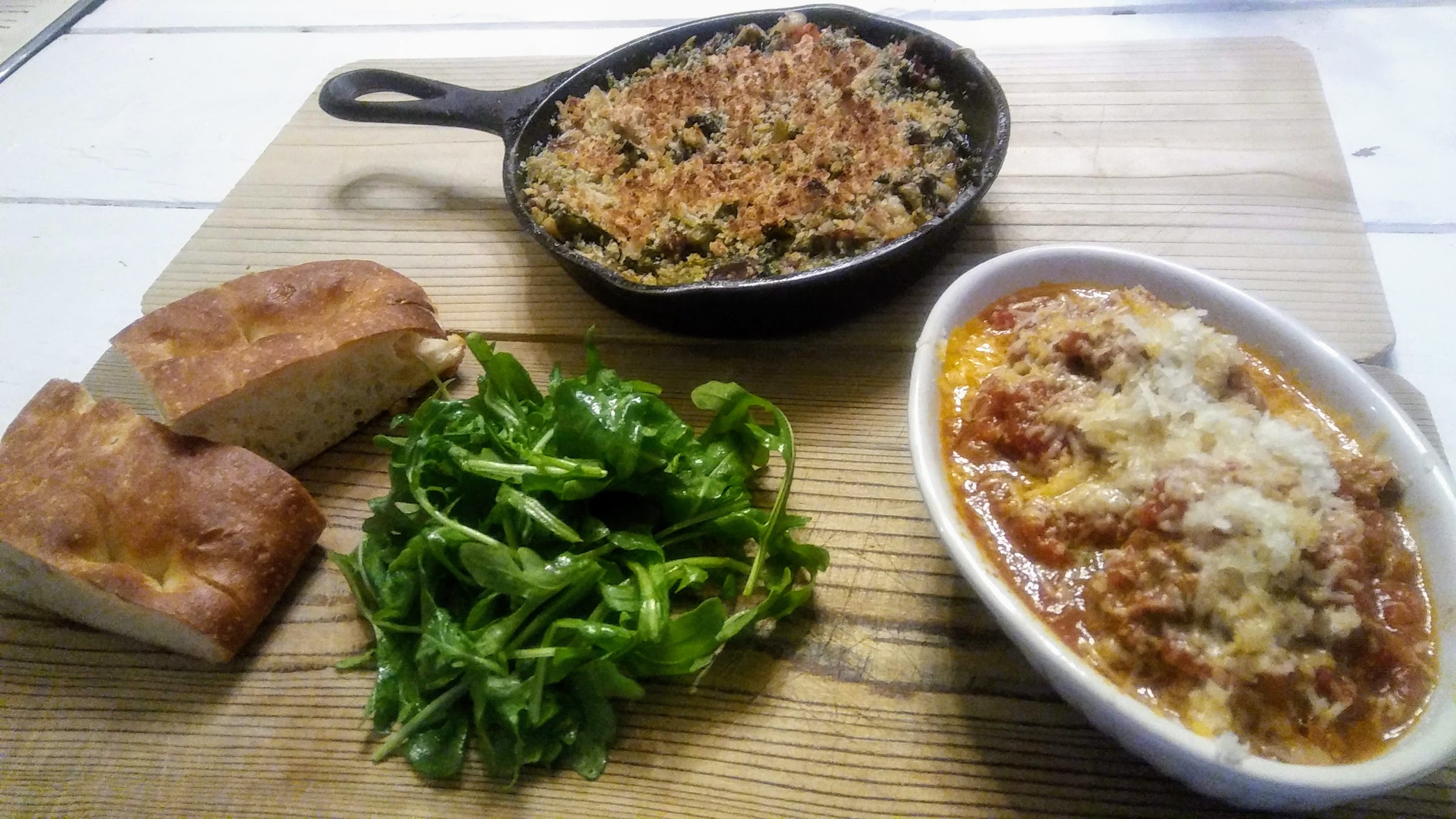 Two big, tender, delicious meatballs, made with ground pork and beef, served in a nice, zesty tomato sauce and finished with lots of parmesan. Served with some fresh crusty bread and a small green salad, it was a great dish. The portion was a bit small, though. Nah. just kidding!

The Utica greens are made with escaroles, mixed with prosciutto and topped with bread crumbs and parmesan mix. A leafy green vegetable from the chicory family, along with frisée and endive, it has a slightly bitter flavor, but much less than her cousin. It’s also much more tender than other greens such as collard greens or kale.  The leaves were cooked with a mix of spicy spices, giving the dish a nice heat undertone, cooled by the parmesan topping.

We had a great time at The Kitchen. The service was excellent, friendly and efficient. Owner and head chef Sam even came by to thank us, and they pledge to open early for us the next day, so we could enjoy some more cocktails after our round of golf!

“The Kitchen is one of the best kept culinary secrets that the dining scene has to offer,” Ken resumed. “hey only thing better than their fare is the unbeatable, friendly service. That alone sets them apart and you leave feeling you just had a terrific dining experience with family.”

I expect we will be back.

As promised, Turk and I returned for cocktails, although with new companions. We sat on the patio this time, as we had the place for ourselves as the staff were running around, planning for the evening. But they were ready for us and happy to open up the bar! 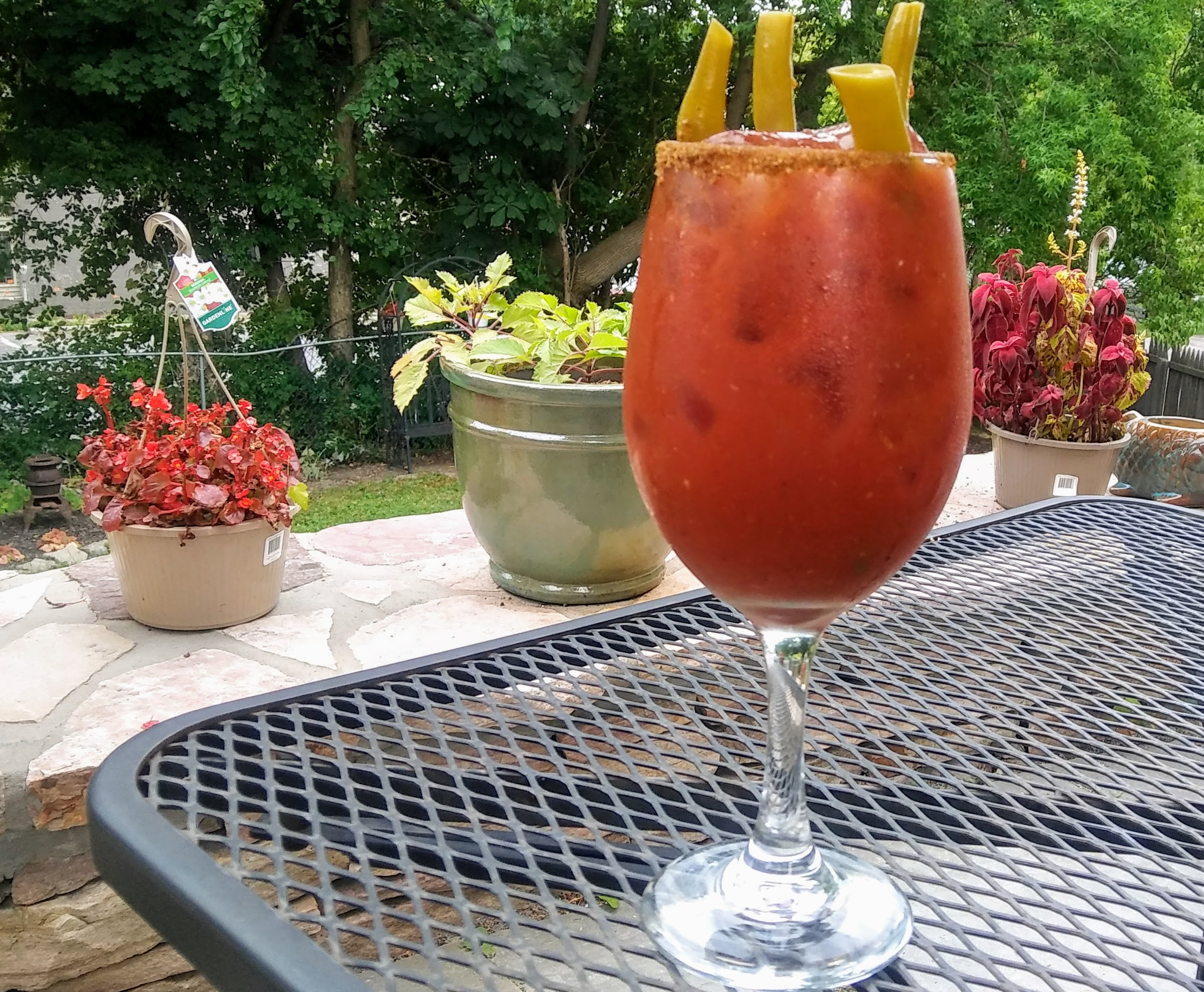