Rubio’s surfing above the competition

We were shoe shopping in Mesa. Time flies when you shoe shop with kids. Because nothing matches the cross-specifications required by Ms. Waffle and Mini Waffle – and when it does, the shoe doesn’t fit.

Suddenly, a Spiderman shoe seemed to fit the bill. Alas, I noticed that the left shoe’s blinking light wasn’t working (a clear specification). In order to convince Mini Waffle to agree to the non-blinking Mickey Mouse snickers, Ms. Waffle tried to bargain lunch at a restaurant of his choice. He picked St-Hubert. Unfortunetaly, the closest one is a 37 hour drive away. Back to another pair of blinking Spiderman, previously rejected by Ms. Waffle because they were too heavy.

But admitting defeat on shoes meant she got to pick lunch, and selected Rubio’s Coastal Grill.

Rubio’s Coastal Grill, formerly known as Rubio’s Fresh Mexican Grill, is a fast food chain surfing on the growing “Fresh Mex” trend, like Chipotle and Mucho Burrito. Rubio’s specialty, however, is fish tacos – hence the Coastal Grill frame. And decor, which is meant to bring you to Baja. 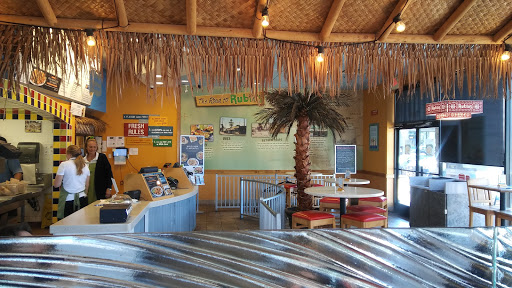 The first Rubio’s restaurant opened in 1983 in San Diego. As a college student and son of a Mexican immigrant, co-founder Ralph Rubio used to make regular pilgrimages to Baja California’s beaches. Ralph discovered fish tacos at seaside taquerias and years later, brought them to America.

Today, there are more than 200 Rubio’s in Arizona, California, Colorado, Florida, Nevada and Utah. Its headquarters are in Carlsbad, a northern suburb of San Diego.

While the Original Fish Taco is still the flagship of the chain, the menu has grown to include grilled seafood options, steak or chicken served in tacos, salads, bowls, and burritos.

The kids love Mexican food, so they were quite happy. Though the Waffle Jr. was being difficult – she wanted a taco with nothing on it. What? She ended up settling for a Chicken and Cheese Quesadilla. Mini Waffle picked the Steak Tacos. Both kid meals came with two sides – Ms. Waffle picked the corn chips and unsweetened apple sauce for them. Speaking of her, she ordered the Steak Burrito Especial. I ordered two Original Fish Tacos with a large side of Mexican rice. Turns out, one of the Lunch Specials was two Original Fish Tacos and a regular drink for $6.99. Sweet. We ordered at the counter and found a booth to settle down.

While waiting for our food, I went to get our drinks. On top of the usual fountain pop from the Coca-Cola family, Rubio’s serves unsweetened, fresh brewed iced tea! There was a selection of black tea, passionfruit, and mango green tea. Good stuff. I then explored the Salsa Bar. With everything made home fresh daily, it was a nice touch. 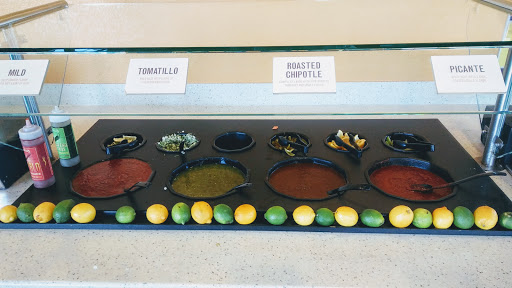 The Salsa lineup had four offerings: the Mild, the Tomatillo, the Picante and the Roasted Chipotle. On top of that, two hot sauces: the Diablo and the Jalapeño Citrus. From left to right, starting with the top row: 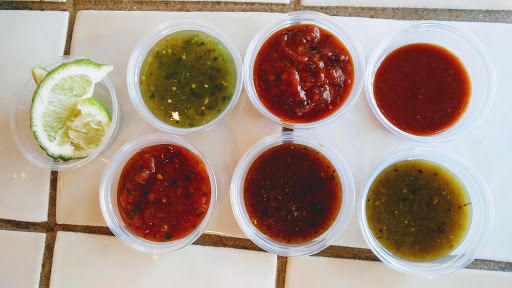 Our food was delivered quickly, but not too quickly. There is some care here.

First, a general comment: the quality of the tortillas and taco shells was remarkable. They were fresh, thickly made with quality ingredients, allowing for a nice crispy surface and a chewy bite.

The kids ate all their food very quickly and were appreciative. The Steak Tacos, served in a warm corn tortialla, was made with marinated grilled steak, chopped, not ground meat. The steak was delicious, smoky, meaty. It was topped with guacamole, salsa fresca, chipotle white sauce, cheese and crisp romaine lettuce. The Chicken Quesadilla was made with a toasted flour tortilla with juicy grilled chicken and a melted blend of cheeses. No guacamole, no salsa fresca, no sour cream though – as requested.

Ms. Waffle’s Burrito Especial was a big one. 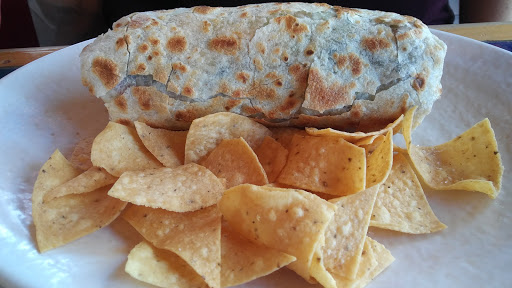 It was filled with the marinated grilled steak, fresh guacamole, citrus rice, black beans, lettuce, roasted chipotle salsa, salsa fresca and the chipotle white sauce. It was nicely wrapped in a gently toasted flour tortilla and served with a (small) side of tortilla chips. A very good burrito.

My two fish tacos looked pretty good. Rubio’s original fish tacos are made from Alaskan pollock, which is not very Mexican. Now, to be fair, it is sustainable and wild caught. Still. The fish is dipped in a beer batter and fried. I admit, it was cooked to crispy perfection, while remaining fluffy and fishy. 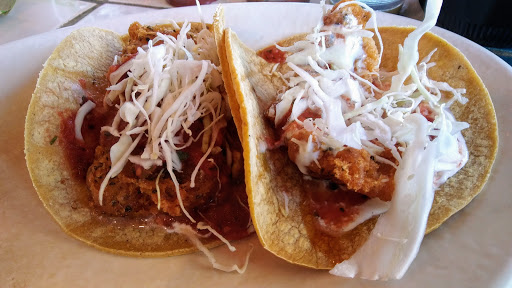 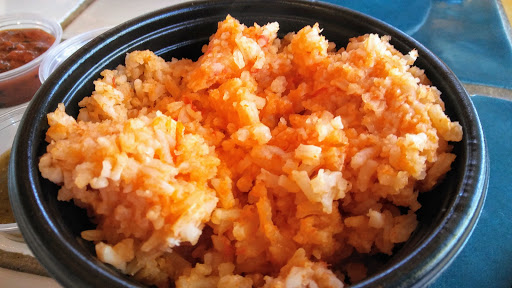 The Mexican rice was alright, I guess.

The texture was fine, the flavour was quite mild – some tomato in there, some garlic. I used it mostly as vehicle for the salsa.

Overall, this was quite a pleasant discovery. I wouldn’t be unhappy to go back there for a quick lunch – and none of the Wafflers would complain, I reckon.