‘Tis the season for road trips and lunches on the go.

And the young Waffles had been bugging us for a stop at Tim Hortons for weeks now.

Despite my strong will, Ms. Waffle joined the fray as we headed out for Frontenac County for the Noël festivities.

I had other helpful suggestions along the way. But it seemed there was no way around it. We would have to stop around 12:30 in Carleton Place, since it would coincide with my car’s need to be fed too. I was dreading the arrival. It is the Holidays. It would be packed. It would be loud. It would smell like bad coffee and candy canes.

Neither the McDonald’s next door nor the A&W across the street could sway them. In they went into the Timmies. The thought occured to me that I could just fill up and keep driving. All the presents were in the car anyway!

Ms. Waffle brought me back to reality and asked what I wanted. Ribs, I suggested. Or maybe their Beyond Burger if they still had it. (They didn’t.)

She went in with the kids to face the crowd, order our meals and grab a table. I went in soon after, to find the location not as full as I expected. The place was busy, but mostly with people going in and out and smartly refusing to wait 40 minutes in their car for a coffee. Mel had already secured a table and 3 out of 4 drinks, her coffee missing in action.

What was not missing in action was a hot steeped tea, splashed all over the floor and retaining wall by a distracted customer waiting at the counter for her order. Ho! Ho! Ho!.

Mel wanted the Crispy Chicken Wrap, but alas, they were out of chicken. So she ordered the first item on their lunch menu: the Turkey Bacon Club, which I hadn’t had in a long time.

There were 12 sandwiches on their menu, but when you drill down, there are really only 3 different items, with options: The sandwich, the wrap and the grilled cheese.

Then you have the Chicken Wrap. Add bacon and ranch dressing for their Chicken Bacon Ranch Wrap. Or go with crispy chicken with either the Jalapeño Chicken Wrap or the Chipotle Cheddar Chicken Wrap.

Then there is their Grilled Cheese Melt selection. Go regular, or add Bacon, Ham or Turkey. Tada! 12 sandwiches.

While the new rustic bun has stayed and is now their main sandwich bun, I am sad to report that Tim Horton’s has reverted to sliced turkey deli meat. Now, mind you, you rarely get the advertised slices of turkey. It was more like chunks and shredded turkey, which was not ideal for structural integrity, but in my opinion a more flavourful and healthier option than deli turkey.

But that is what I got, with a side order of Potato Wedges.

The autopsy shot allows you to see a fairly stable structure: From the bottom, you have mayonnaise, tomatoes, lettuce, sliced turkey, bacon and more mayonaise.

First, let me point out the pinkish hue of the deli meat, indicative of a fair amount of nitrites. Still, the meat was fresh with a decent deli turkey flavour. The bacon was, of course, pre-cooked and slapped on. It was a bit chewy and salty for my taste buds.

The lettuce was nice and crispy, but the tomatoes were meh. The time of the year, no doubt. The bun was quite firm, if not hard in the corners. While it allows for the sandwich to hold together nicely, I like a little more softness to the touch.

On the side, potato wedges, which Tim Hortons introduced as a new menu item at all of its locations in June 2016. I was a sceptic at first, but I admit that the golden crunchy outside and soft creamy inside convinced me, along with the garlic, onion and parsley seasoning. 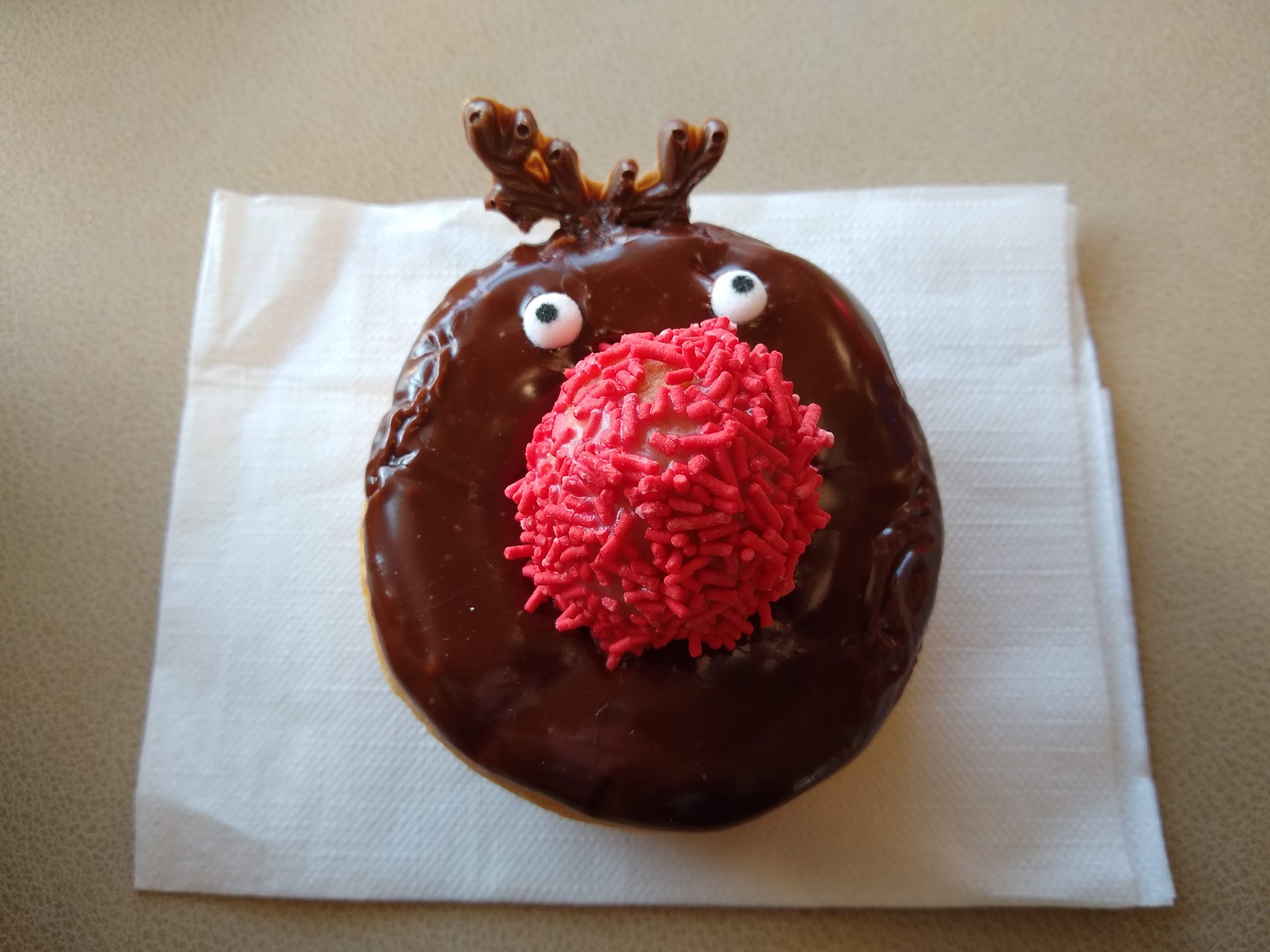 Meanwhile, the kids got to enjoy their Grilled Cheese Melt, and, more importantly, their festive red-nosed Reindeer Donuts: Chocolate Timbits, rolled in red sprinkles and set on top of chocolate dipped donut with two sugar eyes and chocolate antler. Chased down by a Candy Cane Hot Chocolate.

The Waffle Jr. deconstucted her donut, eating each part separately. Mini Waffle ate the nose first, with no hands.

Is it over yet?