Deli Chenoy’s is goner in Gatineau – a Waffle exclusive 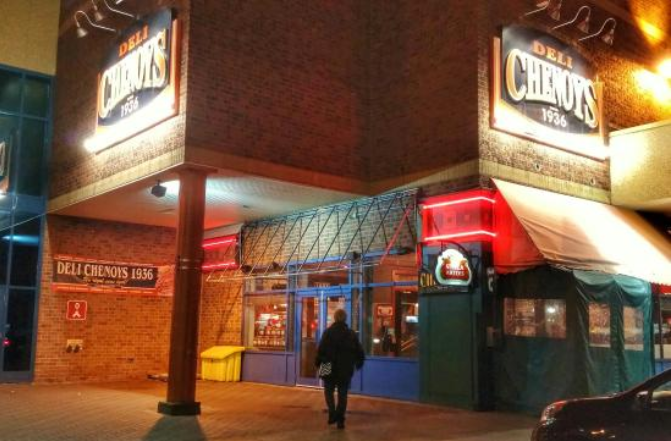 The Deli Chenoy’s brand is taking another step towards oblivion as the owners of the Gatineau franchise announced this evening that they had put the final touch on their rebranding, getting rid of Chenoy’s in favour of another famous smoked meat chain.

The location, which opened in the Complexe Lumière (otherwise known as Cinéma 9) in 1997, is now officially a Nickels.

This leaves the Dollard-des-Ormeaux Chenoy’s as the last one standing for the chain, which was established in 1936.

The management team remains the same, so it’ll be interesting to see the transition.

It is not the first time Nickels Delicatessen is opening stores in the National Capital Region. I recall one location on the Greber boulevard and another one on Dalhousie street in Ottawa.

In the early 1990s, Lawrence and Peter Mammas partnered with Paul Sara, René Angélil and Céline Dion to create the restaurant chain Nickels.

Originally designed as a typical North American family diner, Nickels redesigned some of its restaurants and introduced a grill and bar concept. It has refocussed as Nickels Delicatessen, with a fairly extensive menu ranging from hamburgers, chicken and ribs, to pizza, salads and a number of sandwiches, including of course Montreal-style smoked meat.

Dion and Angelil sold their shares in 1997, but the Céline chocolate cake remains a popular item.

The franchise ran into trouble in 2000, when franchisees of the group, which had around 40 restaurants in Quebec and Ontario at the time, got into trouble with the taxman for using software that saved them from paying taxes. 17 restaurants in total were involved in the scheme.

The Gatineau location is the 11th restaurant under the new administration with most of them being in the Montreal area.