Regular wafflers will know that when I go to Québec City, I often make sure to drop by Chez Ashton.
And this Thanksgiving week-end was no different. After a morning shopping at Les Galeries de la Capitale, we made our way to Chez Ashton on 1st Avenue for lunch.

Quickly, the tray was filled with our orders and we made our way to a quiet corner of the location. The poutine saucisse would not resist our assault! 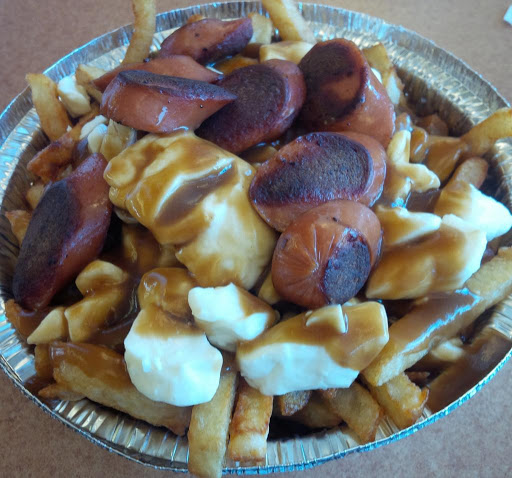 Ashton’s fries are really what makes me come back, I think. The potatoes they use are from l’Île d’Orléans and freshly cut by hand every day. The gravy is a brown sauce, a tad thick, not too salty. Quite good. Once again, the cheese curds were fantastic – fresh from la Fromagerie Côte-de-Beaupré, great moisture level and a good “squeek-squeek”. They did not skimp on the cheese, as you can see.

On the sausage side? Yeah, the portion isn`t great. It seems that no matter the size of the poutine you order, the sausage remains the same size and they add only one more, it seems. Bigger than a regular hot dog frank, it is sliced then grilled on the flat top. These had significant char marks, a little much even. I guess It made for an interesting texture contrast, and flavourwise, the sausage was pretty good.

Not disapointed by Ashton, though. Rarely am.