On the Shore of the Rideau Canal

I was invited to a dinner meeting at the Shore Club, located in the Westin Ottawa, right in the heart of downtown Ottawa.

The restaurant decor is meant to remind us of an art deco ocean liners with contemporary lines.  5 million dollars were invested by the owners into this space.  It is large and spacious, with a high ceiling and a glassed front on the Rideau Canal. They are going for a very chic and elegant look..

The owners were ambitious about the spot.  “We’re trying to create a night-out atmosphere where people come, have fun and feel invigorated —  laughing and talking … It will be more like a New York restaurant, with a bit of a buzz to it,” principal David Aisenstat told the Ottawa Citizen before the opening.

But be warned, this steakhouse is not what you might think: “Our market is upscale, the 30-something-plus age group. This will not be a meat market.”  Scout Magazine wasn’t impressed.

The Shore Club’s menu is a mix of Seafood and Steaks, with sides being offered à la carte.  Don’t come here for a cheap date would be my advice: the main course are between 28$ – the Buttermilk Fried Chicken #14 – and 67$ – the Canadian Lobster tail.

Bread was brought, a warm, fluffy loaf, cut in quarters. 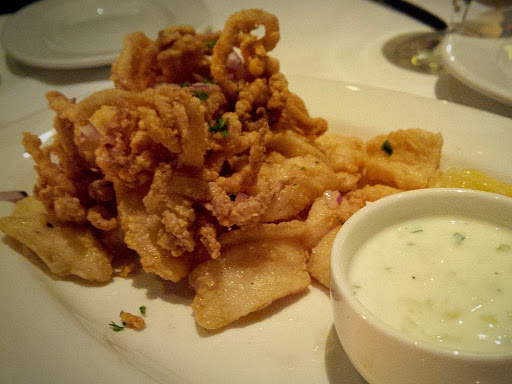 The cucumber yogurt dip was nothing special, yet simple, well executed, refreshing.

As for the Spicy Popcorn Bistro Shrimp, it wasn’t as good. They had been shelled and tailed and deep-fried, and were a bit overcooked. They were also rather small, which is the “Popcorn” concept I guess – but it lacked the “pop” you get with a bigger shrimp. The Cajun mayonnaise was not very spicy, which was also a bit of a letdown.  Nevertheless, none were left on the plate.

For my main, I decided to stick with seafood and had selected the Herb-Dusted Sea Bass baked with mixed beans and ancho-chili aioli ($37). 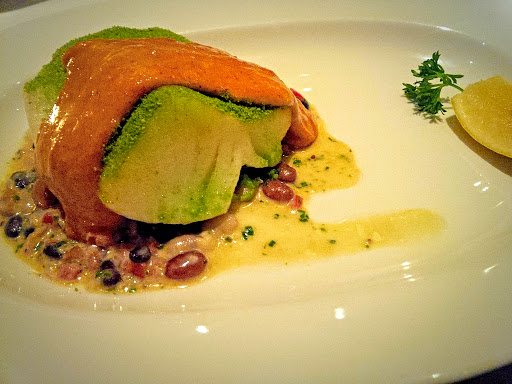 Now, that was an impressive looking piece of fish!  The presentation was simple, but the colour contrasts were amazing. The pearly white sea bass flesh, the bright green herb dusting, the intense orange of the ancho-chili aioli, on a subtle bed of mixed beans and tomato.

This was a very good dish.  The fish was baked perfectly, light, buttery. The delicate, mild flavour was not obscured by the aioli, though the herb dusting was. The mixed beans stew was giving the dish a nice contrast in flavour and texture, rounding out the dish very well.  Quite enjoyable. 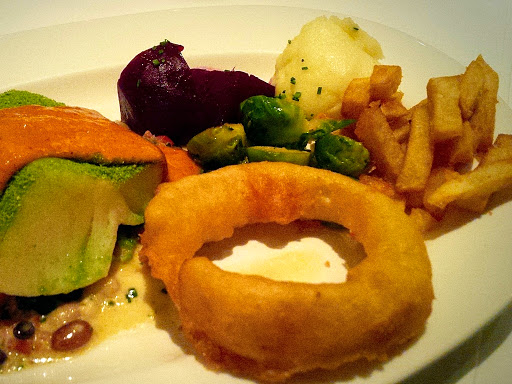 Since everything is à la carte, we ordered a few sides to share:

The service was a bit approximative, with minor confusion at times. Perhaps a lack of experience. Nothing to prevent us from enjoying the food.