As planned, I headed to Subway on Sparks Street for National Sandwich Day. I expected a busy restaurant, but if there was a lot of customers, it didn’t feel like a special day.

Indeed, there was no real signage or advertising for National Sandwich Day at this Sparks Street outlet. Where is the pride?

Now, many had seen the TV ad, or read about it online. But many in lines weren’t aware.

That said, the Sandwich Artist at the order counter was pointing out the promotion to some puzzled customers. Buy a sandwich, get another one free! (Or, buy a footlong for the price of a 6 inch. Not as good of a deal.)

I took their currently featured sandwich, the Prime Rib Melt. The sandwich was launched last year in Canada. To compensate, my 2nd sandwich was the Oven Roasted Chicken.

The Sanwich Artists got to work and built them in no time. 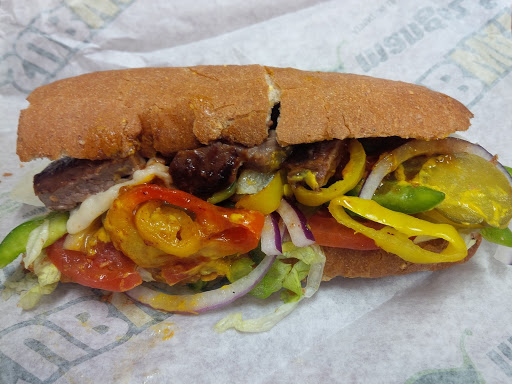 I ordered the Prime Rib with Swiss Cheese on Honey Oat, please, with all the veggies, with mustard and BBQ sauce on 9-Grain Wheat.

Subway describes the Prime Rib Melt in glorious term: “Thick cuts of juicy Canadian beef are layered onto every one of our new hand-crafted Prime Rib Melt sandwiches. Toasted to perfection with melted cheese and built to your highest standards, this is a sandwich not to be missed.”

Not to be missed, but a bit of a mess. Like this guy, I do miss the way Subway used to cut the bread.  Toppings have a tendency to shoot out the side anytime you take a bite. And the Bread doesn’t hold together as well – I haven’t even taken a bite and it’s already split on top.  Besides, if that’s toasted to perfection, someone doesn’t know what toasted means. Or perfection. Or both.

The meat is meant to be the star of the sandwich, and it was a bit disappointing. The beef was cubed, fairly thick. The flavour not bad, but a it was a bit chewy and certainly not juicy.  There is a bit of a glaze on the meat, very low key. I was glad I asked for BBQ sauce. Unfortunately, even after toasting, the meat was only a bit lukewarm – this beef cut perhaps is too thick for the Subway toaster.

The veggies were fresh, as is usually the case.  Considering the premium price, however, I do not think I’ll get this again. 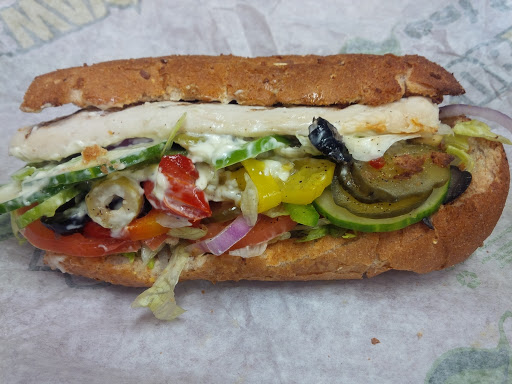 My second sandwich was the Oven Roasted Chicken.

I ordered it on 9-Grain Honey Oat, with light mayo and sweet onion sauce.

It is one of the healthy option at Subway, with 4.5 grams of fat in a six-incher, compared to 13 g for the Prime Rib Melt.

Now, contrary to that name, this is not actually Oven Roasted Chicken. Indeed, the piece of chicken has grill marks.

Now, don’t let yourself be fooled by the shape. Despite what it looks like, this is not a grilled chicken breast.  Instead, you get a chicken breast-shaped patty with grill marks. And it is apparently made with 20 ingredients.

In the end, it is a bit of a disappointment. The chicken patty is kind of tasteless, the texture not very pleasant. The temperature was better than it was for the beef, but it still wasn’t good enough.

I do enjoy Subway from time to time, and I am thankful for National Sandwich Day.

It allowed me to try two sandwiches I won’t order again.