Is a Big Mac with Bacon still a Big Mac?

As most of you Wafflers know, we are Big Fans of the Big Mac in this corner.

So when I found out that McDonald’s was adding (temporarily) Bacon to it’s flagship burger, I was intrigued. This is the first change to the sandwich in Canada in 50 years and it is seen by business insiders as a test for making the move in the American market.

Nevermind the fact that you always could have asked to get bacon on your Big Mac, the real question is, is a Big Mac with Bacon still a Big Mac?

The fast-food chain is confronting us with this deep existential dilemma™, via a Cosette marketing campaign.

I headed over to the McDonald’s on Bronson, squeezing this existential dilemma™ between a tv appearance and a curling game.

I ordered my Big Mac Bacon meal deal, a little more pricy than the regular Big Mac, and was now on my journey to solve this existential dilemma™.

The beef sandwich had a familiar shaky structure to it: 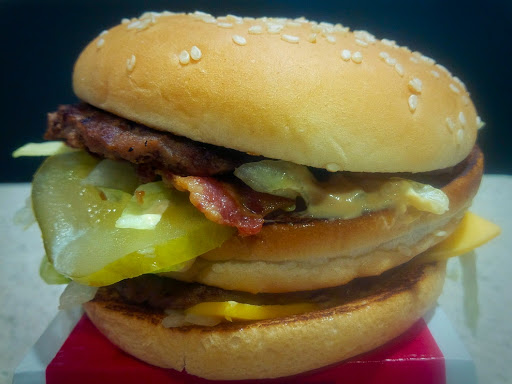 I took a bite. It tasted like a Big Mac. But something was off. One thing is pretty much accepted by the Waffler nation: It’s rare for a burger, or anything really, to be made worse by putting bacon on it.
But it might just be the case here.

Bacon is supposed to be crispy, smoky, salty. A great compliment to a juicy beef patty, right?
Except, of course, that the Big Mac patties are anything but juicy. Furthermore, McDonald’s bacon is not super smoky, certainly not crispy, and most definetely not plentiful. If anything, it is a tad chewy and quite sweet – it doesn’t complement the burger, as you already get enough sweetness from the onions, pickles and special sauce. It changes the very nature of this burger in a fundamental manner.

The Big Mac Bacon will be available through February 20, 2017 (and beyond by simply asking for extra bacon). You can test it and take your own stand on this existential dilemma™. And let McDonald’s know through  an online poll. At the time of publishing, 64% agreed it was still a Big Mac.