Our little Wafflings simply love St-Hubert. Whenever we ask them about going to a restaurant, St-Hubert is their choice 95% of the time. Here and there, Boston Pizza or Benny & Co. will pop up as an option. But St-Hubert is where it’s at.

Now, we used to always head tothe Maisonneuve location in Hull. But ever since they renovated, at a cost of a million dollars, to make it more modern and somehow “retrochic”, the Wafflings are done with it. Imagine, St-Hubert replaced their favorite games room with a wine cellar. “We don’t drink wine at St-Hubert, papa. Not even you!”  Wise words.

Indeed. I’ll have the odd beer, but I usually stick with the bottomless Coke or Sprite. But that’s beside the point.

Bottomline is, our new family location is now on the East end of Gatineau, a location that was also renovated in 2015 (for 1.3 million) but that wisely upgraded the games room with touch screen entertainment as opposed to filling it up with booze.

So here we were on the glamorous Maloney Boulevard, on a glorious Saturday afternoon for another “we want chicken animals” lunch, now a Waffle classic family. After many attempts, the fries and julienne vegetables split has been accepted as a compromise by the Wafflings, allowing them to let us order for them in exchange for extra time in the Cylons’ games room.

For Mr. and Ms. Waffle, St-Hubert is currently offering 5 of their Classics for 10 dollars. 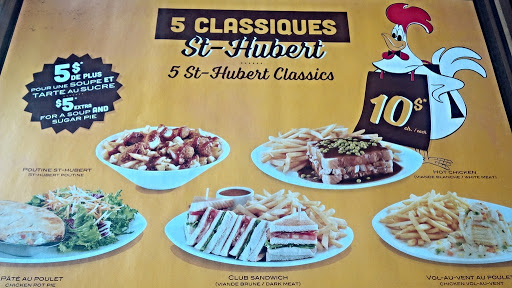 Chicken pot pie. St-Hubert Poutine. Club Sandwich. Hot chicken. Chicken vol-au-vent. Until February 26th, you can enjoy these “classics“ and save between $1.50 an $2.50 on each dish.

Of course, everybody knows that the real classic at St-Hubert is the Quarter Chicken. One could make a case for their Ribs, too.

Nevertheless, these are classic chicken dishes. Except for the St-Hubert Poutine, which is a fairly new addition to their menu – as opposed to their regular Poutine. It is, however, starting to replace the St-Hubert Wrap as Ms. Waffle’s classic order.

Looking at the menu, I realized that I had never had a Club Sandwich at St-Hubert. Odd, because I love Club Sandwiches. My choice was made, and our meals were quickly served. 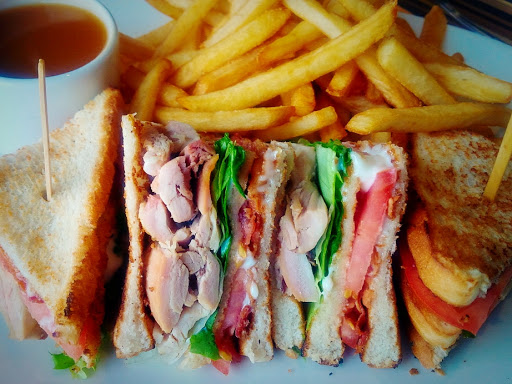 The sides were as good as usual. Crispy, golden french fries and salty, drinkable BBQ sauce were standing on guard.

There was mayo, but I had to ask for it – it’s added on customer’s request only.  I also asked for extra, and I can confirm that St-Hubert is serving Kraft Mayonnaise.

The sandwich was served on white bread.  I would have asked for brown, but I wasn’t prompted and I failed to think about it on my own.

The sandwich was well constructed. The pieces of chicken were fairly big. The tomato, a tad mealy, but ’tis not the season. The lettuce, crispy.

Nevertheless, this was a pretty standard club. Nothing special, nothing memorable, but nothing offensive or really problematic either. Kind of meh.  Thankfully, you can dip it in the BBQ sauce, which is there to save the day! Oh, such drinkable wonderfulness.

For $10, you get what you pay for. If, in the next month, you are craving a classic, standard Club Sandwich, go get it at St-Hubert. Sure, you could get the same sandwich basically anywhere else. But you won’t get the sauce.