Chipotle has arrived in Ottawa

The rumours started last spring with what appeared to be a job posting. Chipotle was looking for a restaurant general manager… in Ottawa. Even though Chipotle wouldn’t confirm, it seemed obvious.

Even more obvious when Cadillac Fairview posted a new floor plan for the Rideau Centre – something folks on reddit shared widely in August: Chipotle had a spot secured in the old Elephant & Castle (followed by the failed The Exchange) location at the Rideau Centre, at the corner of Sussex and Colonel By.

Chipotle confirmed on Twitter what every Ottawa Foodie was hoping for and expecting:

@CBCOttawa @parkerwags Yep, if all goes according to plan, we’ll open there on January 30th. Don’t beans a stranger. -Dre

It didn’t quite go according to plan, as the first Ottawa Chipotle finally opened on February 2nd at 10:45 am. It is now open every day from 10:45am -10pm.

The first Chipotle Mexican Grill opened in 1993 in Denver, Colorado. The chain operates more than 2010 locations in the USA, France, Germany, UK and Canada.

Chipotle markets itself as serving high-quality raw ingredients with classic cooking techniques, it is all about food served fast without the “fast-food” experience.

In order to keep up with that mantra, Chipotle’s menu is quite simple:
Four main items: burritos, bowls, tacos, and salads, all at $8.95.
Six fillings: chicken, steak, carnitas, barbacoa, sofritas and veggies. (They have chorizo in the States.)

You want guacamole? You have to pay extra.

That’s basically it. It’s that simple.

Between a meeting and a conference call, The Waffle had time to drop by and check it out for your enjoyment.

It was barely 11:30am and the place was already busy. I lined up and for some reason, I decided to go with a bowl. With barbacoa. I asked for brown rice, their hot tomatillo red-chili salsa, all the fixings except for guac, because $2.21 extra, really?

In no time, I was served and ready to go.

I found a spot with a view on the canal – well, mostly a view on Colonel By’s traffic. Nevertheless, a window seat. 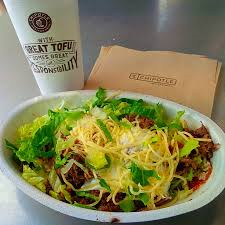 It looked pretty good, if a tad sloppy. Which is why I guess it is better to burrito-it-up.

The barbacoa was shredded in fairly big pieces. The beef had a hint of smokyness and spice, but nothing close to a revolucion. It was fine, I guess. A bit bland.

The rice had a little chewiness, with a subtle taste of lime and cilantro. their tomatillo red-chili salsa tasted good, but for a hot salsa, it wasn’t very hot at all. They seem to reinforce it with Tabasco, they could add more. In fact, that’s what I did, picking some Tabasco Chipotle to add some zing to it all.

The chopped romaine lettuce was fresh enough and the cheese, a blend of Monterey Jack and Cheddar, was what was expected flavour-wise. But because it was the last thing added, it didn’t melt at all. Which is a shame.

All in all, it was not bad. It was served fast, the menu is simple and easy to choose from, the portion was appropriate and the price is right. In a pinch, you could do worse than stopping at Chipotle. But you could also do better, especially in the Burrito-world.

Oh, and I had no care for the slogan that came with my drink. There is no such thing as great tofu, no matter how you sofritas it up.