Skip to content
Home Restaurant Brewery Don’t mess with Texas… so why did you?

Don’t mess with Texas… so why did you?

I hadn’t been to the Clocktower in quite some time. But since Philippe and I were meeting for lunch, it made sense to meet there, basicially at the halfway point between or geographical locations.

The Clocktower is a brew pub chain that now has 6 locations across Ottawa. The original brew pub, on Bank street at Isabella, has a clock tower. It opened in 1996.

So yes, they serve their own home brews. The Kölsch, the Raspberry Wheat, the Wishart’s ESB, the Bytown Brown, the Whalesbone Oyster Stout and the Clocktower Red. To that, you can add a selection of seasonal beers, such as the Beerista, the Knifewear Tongue Cutter West Coast IPA, the Clocktower Pumpkin Ale, the United A.P.A., the Pucker Up Sour Cherry!, the Ottawa Pale Ale, the Pint of the Living Dead, the 38th Battalion Ale, the CT Vienna Spring Ale, the Empty Netter Ale, the East Coast IPA, the December Dark Ale, the Clocktower Kriek and even The Final Frontier, a licensed Star Trek-themed beer.

The menu is a little more eclectic than the usual pub fare, offering interesting variations and ingredients. Their salad section includes a Jamaican Kale salad. You’ll find a Wild Board Poutine and Kimchi Fries in their apps. Their mains feature a Five Spice Honey Salmon. A Turkey Basil Dip in the sandwich section; six burgers made with your choice of Beef, Turkey or  Veggie.  The Clocktower also usually offers a Feature Menu, bringing some more variety to the menu.

Although I wasn’t sure about the BBQ sauce. I mean, it could be delicious. But what does Rootbeer have to do with Texas?

Hires was created by pharmacist from Philadelphia, Pennsylvania. Barq’s was created by the Barqs brothers in the French Quarter of New Orleans, Louisiana. Roy Allen opened his root beer stand in Lodi, California, which led to A&W. IBC Root Beer was founded by the Griesedieck family in St. Louis, Missouri. Mug was originally produced by the Belfast Beverage Company in San Fransico, California.  Frostie was originally produced in Catonsville, Maryland. Dad’s Root Beer was created in Chicago, Illinois.

With a little research, you’ll find some traces of Root Beer in Texas, but let’s just agree it’s not a State Staple.

Now, Texas Barbecue Sauce however, is a famous style. It is often known as a mop sauce, for the tool usually used to apply it. Usually, it is a thinner sauce than most other barbecue sauces, because it is a basting sauce. Most often, it is applied as a glaze to smoked meats, notably briskets, in order to keep the meat moist and add deep flavors as it smokes. Common ingredients may include things like pepper, chili powder, cumin, salt, garlic powder, onion powder, salt, vinegar, ketchup, Worcestershire sauce, and hot sauce. But, more importantly, classic Texas barbecue sauce has a base of beef stock, or, preferably, meat drippings. Some will go as far as to include chopped-up chunks of the crispy, seasoned brisket fat bits. Not root beer, though.

The burger arrived, and it looked very good. On the side, their salad was more substantive than the “greens” moniker they attribute to it. Veggies were fresh and crisp. 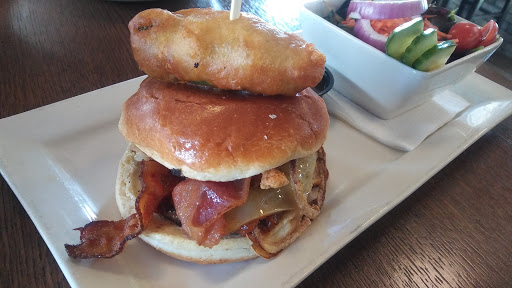 On the bright side, there were nice pieces of delicious, crispy bacon. The BBQ sauce was not unpleasant. Not overly sweet, with a hint of bitterness. There was a good helping of crispy fried onions, giving a good contrast to the burger. The smoked cheddar was holding its own against the different flavours in play. 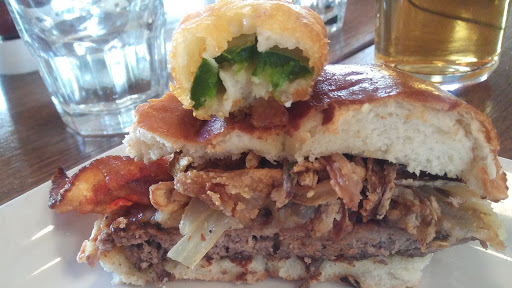 Surprising to me was the deep fried jalapeño served as a garnish on top. Surprising because the menu said jalapeños, so I assumed it would be a bunch of crispy pieces inside the sandwich. So you couldn’t really get any heat from it while eating your burger, it was more a standalone feature. It was a tad oily, but not overwhelmingly so. The pepper was in good shape inside the batter, but was mild as far as jalapeños go.

The burger was made with a good quality, fresh bun, which held everything together all the way through – an important thing in a burger.

Too bad about the beef.

To wash everything down, I had the Clocktower Red, which is probably the most complex beer of their regular selection. It is brewed with a blend of five different types of malt and two types of hops. Fun! A rich, dark red hue, with an obvious malty profile, some sweetness and a tad of smokiness in the finish. Some bitterness, creamy mouthfeel. Good stuff.

I’ll go back for the beer.