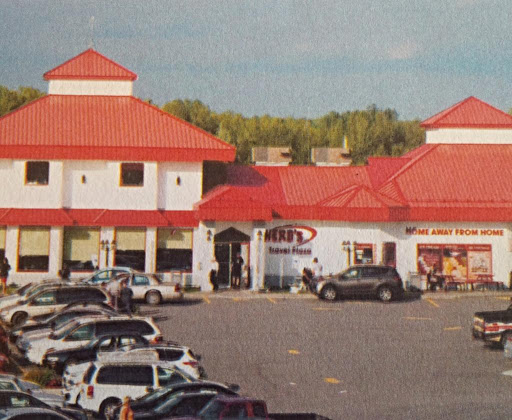 In 1977, Herb Vink Sr. bought property on the new highway 417 linking Ottawa to Montreal. There, he built a restaurant, a gas station, and a towing business at the intersection of Highway 34. Since there was no other business nearby, travelers and truckers started to make regular pit stops.

Herb’s Travel Plaza is still a thriving business in Vankleek Hill, and was fully renovated a few years ago. You can not only get gas and food, but also buy souvenirs, St-Albert cheese, take a shower, do your laundry and get a haircut.

Herb’s is hard to miss, with gigantic signs announcing its presence and its iconic red roof. There is lots of room to move around and a handful of old Cessnas are in the field, not far from the old airstrip.

I don’t come here very often, though, but from time to time I do make a stop. 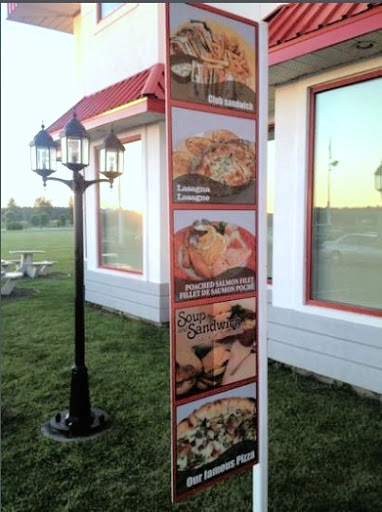 And that’s what happened today.

Their newly expanded restaurant now includes a fireplace and flat screen TVs. The place was packed despite it being after the lunch rush when we arrived. I was craving the Club Sandwich – it was advertised by the door with a nice big picture. I still looked at />Herb’s menu, 10 pages long and featuring all-day breakfast, sandwiches, burgers, subs, pasta, poutine and all kinds of comfort food.

The 4 of us got our drinks fairly quickly, but it took much longer for the food. 30 minutes after we sat down, in fact, our plates finally arrived.

And it was massive. A footlong sub, toasted and buttered, with 12 meatballs smothered in their home made meat sauce and finished with a truckload of melted St-Albert cheese. 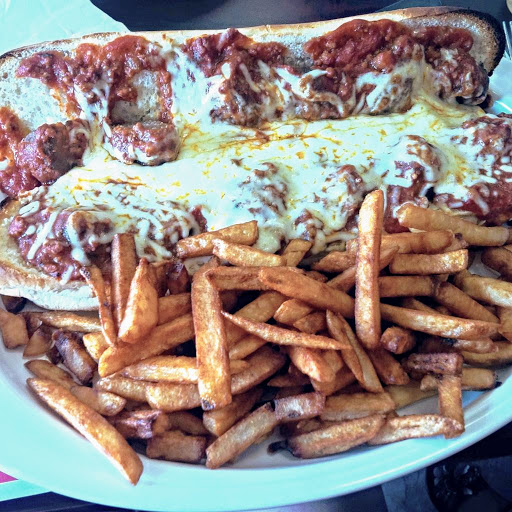 Herb’s meat sauce is deliciously balanced, with a deep herby tomato flavour. There is a hint of sweetness and plenty of meat. You can buy the sauce in the attached C-Store, which I did.

The bread had a nice crust and a buttery flavour. It soaked up the sauce but kept its integrity. The meatballs were dense but tender, and if they weren’t popping with flavour, they still added a meaty layer to the sauce.

As for the Club Sandwich, it is pretty hard to screw up. 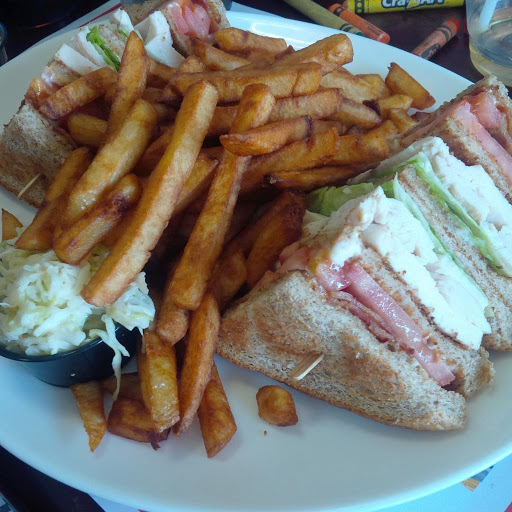 Still, the chicken wasn’t dry, the bacon was crispy, the tomatoes and the lettuce fresh. The bread was standard whole wheat sandwich bread, slightly toasted. So they go the basics down pat. The main problem? They don’t use mayonnaise, but Miracle Whip or something similar. I find that salad dressing a little too sweet.

On the side, a little cup of coleslaw, entirely made of cabbage as far as I could tell. Heavy on vinegar, no layers of flavour. 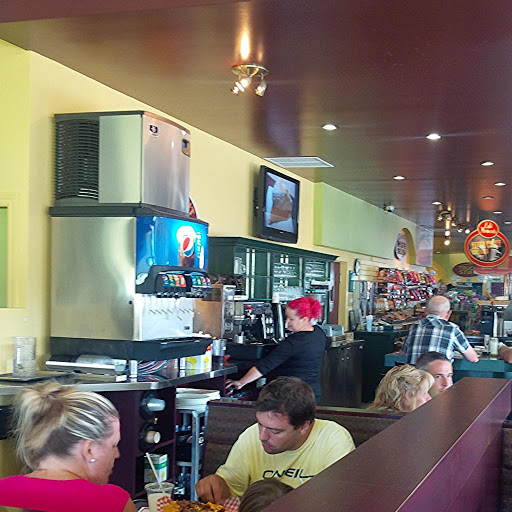 Both of our plates came with a healthy (sic) portion of french fries. These guys are double fried, which is only proper. They are on the dark side of golden, very crispy.

The place was really busy, so it also took a while to get a refill for our drinks.

Nevertheless, the food was good, simple and done properly.

After lunch, we brought the kids to play on the planes. They have been permanently grounded, but some ailerons and flaps work at your command, so the kids had a blast – which probably means we haven’t seen the last of Herb’s Travel Plaza.