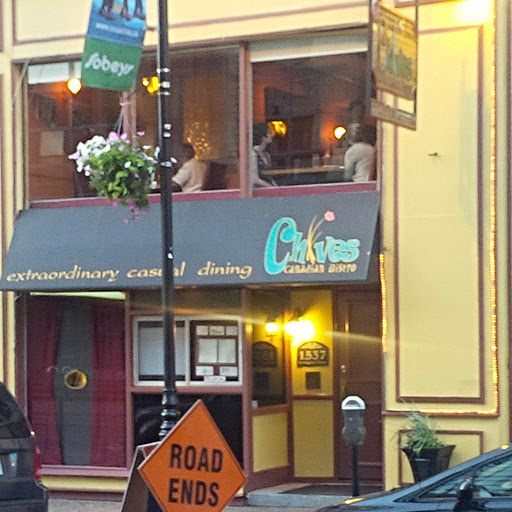 For our first dinner during our Halifax getaway weekend, we decided to go to Chives, which was on a shortlist of recommendations from the Waffler nation. I had also heard good things about Chives Canadian Bistro, although had been warned that it could be a bit pricey.The restaurant was quite busy, which is normal for a Saturday night – thankfully, we were able to make online reservations for a late dinner date.

The restaurant was quite busy, which is normal for a Saturday night – thankfully, we were able to make online reservations for a late dinner date. Chives opened in December 2001 and since then it has gained an excellent reputation, winning numerous awards notably in The Coast.

The restaurant is in downtown Halifax, on Barrington Street,which runs adjacent from the famous Halifax harbour. The outside features a weird doll display, representing something. I don’t know.

The 2nd storey dining room features tones of copper and amber, a very warm and unpretentious décor featuring key elements of the Canadian landscape: water, wood, rock, and sand. The wine cellar is located in an old vault, betraying the building’s former occupant, a Bank of Nova Scotia branch. You can glimpse into the wine vault from the dining area, even dine in it, which is kind of fun. You can also see into the kitchen – the open kitchen concept style is a very popular branché concept that tends to get overplayed. I’d rather they keep the noise down, you see.

Chives uses a lot of fresh, seasonal ingredients; pointing out from which producers, fishermen and farmers it is coming from: Nova Scotia first and foremost to supply the kitchen. Since Chives’ is focusing on seasonal and local fare, the menu isn’t extensive, but is quite varied. They had half a dozen appetizers, same number of entrees and 3 desserts. In addition, they had a couple of daily specials. Two wine recommendations for each dish is provided, making it much easier to decide on a pairing. 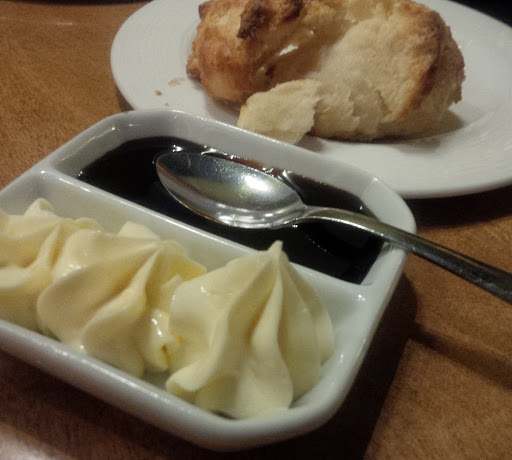 To keep us waiting after we ordered, a stamped paper bag with buttermilk biscuits was brought. As the story goes, chef Craig Flinn had forgotten to order bread for the first opening night of Chives. The plan was to serve bread in a stamped paper bag: “So, with only an hour until the first guest arrived, I called my mother and got my grandmother’s recipe for tea biscuits, changed the shortening to butter and the milk to buttermilk, and the Chives buttermilk biscuit was born. They have been baked fresh every day since,” he recounts before giving the recipe on Chives’ website.

The biscuits were delicious. Airy, soft and flaky; warm and comforting. To go with them, whipped butter and molasses was served on the side. The molasses was intriguing to me, I couldn’t remember the last time I had plain molasses, but it worked great with the biscuits. Rich, deep flavor. Apparently, it was traditional to use molasses as such, back in the days. I remember my mother serving us bread and molasses for dessert when we were young kids, but thought it was just her. Who knew?

Our appetizers soon arrived. Mel had opted to go with their Crab Spring Roll & Braise Porkbelly. A light spring roll with Cape Breton snow crab on one side, with a generous piece of braised Nova Scotia pork belly on a bed of Asian ginger slaw, roasted shallots, topped with honey and a sesame glaze. 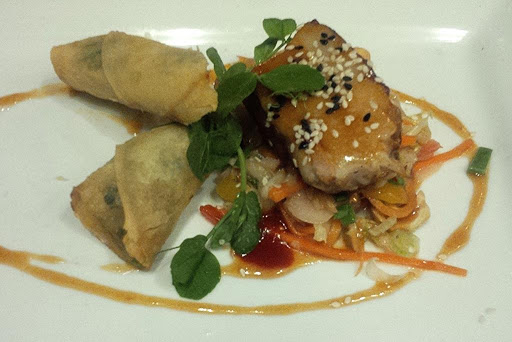 The pork belly was tender, quite decadent, being made even more so by the sweetness of the honey and sesame glaze. The cole slaw was fresh and interesting, a nice crunchy contrast to the belly. On the spring roll side, the delicate crab flavor was struggling to shine, but the roll was light and not greasy.

My appetizer was the Lobster Gnudi “A la King”. Gnudi is similar to gnocchi, except it is not made from potato but with ricotta cheese and a little bit of flour. In this case, it was panko crusted ricotta gnudi. The result was a light, fluffy, and creamy dumpling with a nice golden crunchy crust. 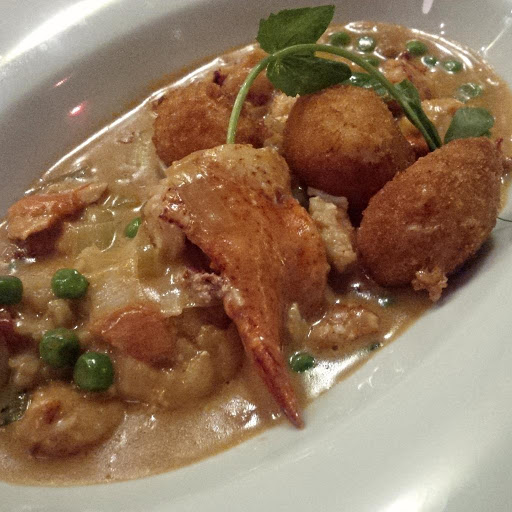 They were the side star to a ragout of lobster, sweet peas, and tomato. The rich, creamy sauce had a lot of depth, a lobster bisque base with hints of sherry and tarragon. Great dish. Thankfully, it was a reasonably small portion.

For her main, Mel had ordered the “Porchetta”. It is between quotation marks on the menu because it isn’t a real porchetta. Usually, a porchetta is a savoury, fatty, boneless Italian pork roast, stuffed with a combination of meat, fat, skin, garlic, rosemary, fennel or other herbs. But Chives’ “Porchetta” is a pork chop, smoked, then grilled. It is served with caramelized onion and a balsamic vinegar gravy. 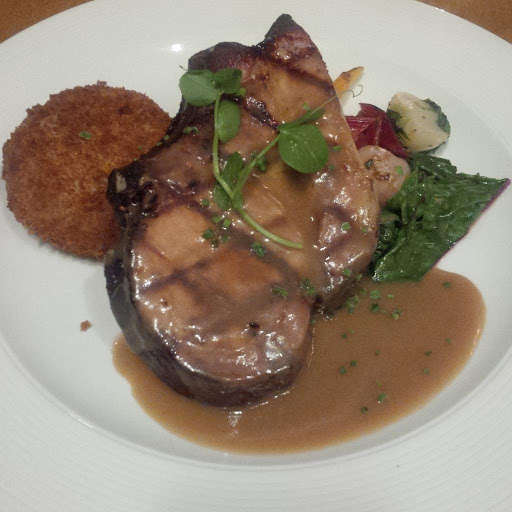 And man, oh man was that pork chop ever good. The smoke flavour was intense, but not overpowering. The meat was tender, juicy, perfect. And the balsamic gravy gave the meat a hint of sweetness to balance things out. The pork was resting on a roasted garlic, lemon and boccancini risotto cake, which was crispy on the outside and creamy on the inside, and the dish completed with a side of vegetables: bok choy, swiss chard and fiddleheads.

For my part, I was convinced that Bill Wood’s lamb cut of the day, a boneless braised lamb shoulder, was the way to go. It was served with a minted sweet pea risotto, asparagus and a candied tomato. 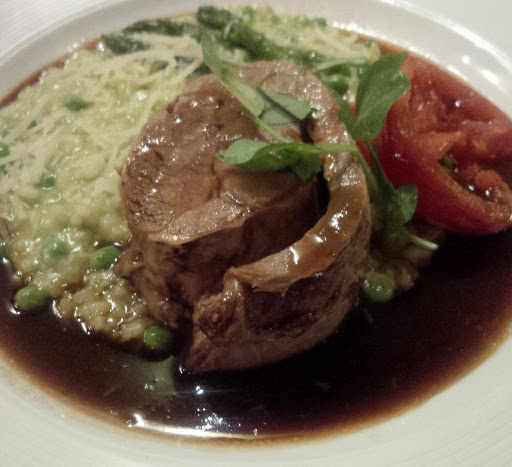 The tomato, greenhouse grown, was juicy and tasty – but not as candied as I expected. A big surprise was the risotto – I wasn’t sure I would like it, I was afraid it would be too minty. But it was excellent, bursting with flavor, a pleasant creaminess topped with fresh parmesan. Love the contrast with the sweet pea pop and how there was just enough mint to make it feel light and fresh. The lamb was simply great, dense and tender. Obviously an excellent piece of meat, prepared with care and cooked slowly. The au jus, spiked with sherry, was rich and salty. On the minus side, the three pieces of asparagus were overcooked, lifeless, almost drowning in the risotto and the au jus.

However, it is fair to say we had a great meal. The service was very good. Our server was lovely. She was attentive, without being invasive, informative, engaging with a sense of humour. Without being pretentious, Chives offers quality fine dining, which makes it worth paying a little extra, especially when you know that most of what you get is from around the corner.