The announcement was made on Facebook and it shook our little community: after 8 years, Pizza de Luigi was shutting down its Chelsea location, and they were shutting it down basically immediately! The horror!

After 8 years of running two business and 6 years of working full time while running them, the owner decided that two restaurants was too much. They will focus all their efforts into the Wakefield restaurant.

Incidentally, Mini-Waffle had already selected Cheezy Luigi as the restaurant we would order from tomorrow, part of our weekly effort to support local restaurants during the pandemic. We realized what was happening only because we wanted to check the opening hours.

So we decided that we had no choice but to order immediately, one last time. Because even though they will remain open in Wakefield, that is a bit of a trek for us.

A family-run establishment, MJ.M.D. Pizza de Luigi first opened its doors in Chelsea in 2013. Their second location opened in Wakefield in the Summer of 2014. Their pizza was voted “Best pizza in Western Quebec” numerous times.

It is a neat spot, and weather and bug permitting it was better to eat outside. We dropped by a couple of times a year to dine on location, but most often we got their pie delivered. Luigi offers two types of pizza, Deep Dish or Old Country Thin; also a couple of salads and pasta dishes.

My favs are probably the Santina Sausage and the Carnivore: the homemade sausage, really makes it. But today, we went with the kids favorites: one large Pepperonni ($19) and one Hawaiian ($20).

Word was spreading fast about the closure in the community, so we figured we would order ahead. We called at 4 PM for a 6 PM pickup, but told us it would have to be 15 minutes later. No problemo!

Upon arrival, another reminder of the sad truth was awaiting. It was a snowy day to make it even worse. LIFE IS SO UNFAIR!

Inside, the place was humming. Half a dozen people were making pies, taking orders, packing them and getting them out the door. The last day was going to be, no doubt, a very good day.

I picked up my order, one of the pies being free thanks to my filled-up fidelity card I remembered to bring (ouf!), and home I went with the very precious cargo: our last Chelsea Luigi pizza!

These were golden beauties. First and foremost, the dough is great. Nice and crispy, not doughy at all, with fennel seeds to give it some oumph. Just great stuff. The sauce is a tad on the tangy side.

The toppings proportion is good, if a tad uneven. Nothing mechanical here, not even methodical. That’s fine by me, it gives it a rustic feel. If you like your pizza with a lot of toppings, you may find these a little lacking, but I find that it strikes the right balance. I mean, how much pineapple does one want on a pizza anyway? On the meat side, the pepperoni is not too greasy, good quality stuff. The ham cubes were meaty and juicy.

Very good pizza indeed. We may have to go to Wakefield soon!

It looks like something will happen soon with the location, thanks to Geneviève Parent and her partner Roberto Caverti.

Chef Caverti was most recently the head chef at La Squadra in Gatineau. Caverti started his career as a Pasta Chef at Timo Restaurant in Isles Beach, FL, before working in a few other establishments, including Acciuaga in London, UK, la Madonnina del pescatore and the Ristorante MOMA in Italy. He then moved his craft to Chelsea and worked at both L’Orée du Bois and Les Fougères.

Rest assured, Waffler nation, that we will monitor closely!

The kids were disappointed because for the first time in a long time, we had to stay home for the Super Bowl.

Feeling their pain, I made a deal with them. Plan the menu. I’ll execute it.
So they did their part.

The menu included a cover page and three distinct sections. On the cover, you will note the team logos, the fields, complete with goalposts, and what I can only assume are characters from Among Us, one near a bench and the other dropping the ball. SUS!

The ‘Appetizer’ section called for french fries, pigs in a blanket, chips and veggies with dip. Simple enough.

The ‘Main Meals’ section was setting the stage for chili, chicken wings and ribs. You will note the NFL simplified logo, a red square and the Pepsi logo, with a chicken wing in the middle.

For dessert, cake and ice cream and a Tom Brady-style under-inflated football.

I got to work.

The chips selection was secured early. Here was the line-up:

Que Pasa Organic Corn Chips are our go-to Corn Chips these days, either for dips, nachos or salad. We like them because they are not too salty, because their size is generous and, most importantly, they are quite sturdy. Goes great with my Smoked Salsa! Ms. Waffle’s pick was Miss Vickie’s Spicy Dill Pickle. MV’s SDP was introduced in October as a Costco exclusive, before being part of a massive recall of Miss Vickie’s products for the extra shattered-glass flavouring. The Dill Pickle hits you first and the heat builds as you snack on them. Great pick.

The Waffle Jr. went for a classic, the Ruffles Regular. Salty, Ridgy, Oily goodness. Can’t go wrong, even if it can get boring over time. I selected Dunn’s Old Fashioned Barbecue. Another Costo exclusive, this is a new flavour for Dunn’s – they have released Dill Pickle in the past. These are delicious, a nice barbecue spicyness to them, a hint of sweetness. A good crunch too. Speaking of crunch, Mini-Waffle got Ruffles’ Ketchup Double Crunch. Double Crunch is right – these have quite the crunch. If you can’t stand hearing people munch, don’t buy these for your guests. Flavour-wise, they packed a punch, but I thought they were too sweet.

The kids had also asked for Pretzels, but I thought I’d go the extra-mile with peanut-butter stuffed Pretzels from Kirkland. And, for good measure, a bowl of Wonderful Pistachios, roasted and salted. I am healthy that way.

Next, I had to get the ribs going. I had two slabs of St-Louis, which I prepped and seasoned with a very basic rub: garlic salt, smoked paprika and ground black pepper.

I then proceeded to smoke them for 7 hours with Tabasco Wood Chips.

I finished them with half a bottle of Nicastro’s BBQ sauce. That’s right, Nicastro’s!

While the ribs were going, I got started on my Chili.

As a base, I used Mark Bittman’s Chili non Carne recipe.

Starting with dry red kidney beans, simmered for 90 minutes in water, along with a whole onion. I drained the beans and reserved the cooking liquid. While the beans were cooking, I sauteed a pound of ground brisket with onions and some bell peppers, along with some chili powder, garlic powder, salt, pepper, cumin and oregano. Then I combined everything together, added some home-canned tomatoes and a cup of leftover turkey chili. I simmered slowly for a couple of hours.

For the wings, I used Bulk Barn’s Smoked Applewood Seasoning as a dry marinade. After a few hours in the fridge, I baked them, because I am healthy that way. The Waffle Jr. loves the flavor and doesn’t do saucy wings, so that was that.

Thus the main meals were ready to go.

The appetizers were next. Veggies, including home-grown carrots, served with a sour-cream-avocado-salsa-blue-cheese dip. I threw some St-Arneault frozen fries in the over. 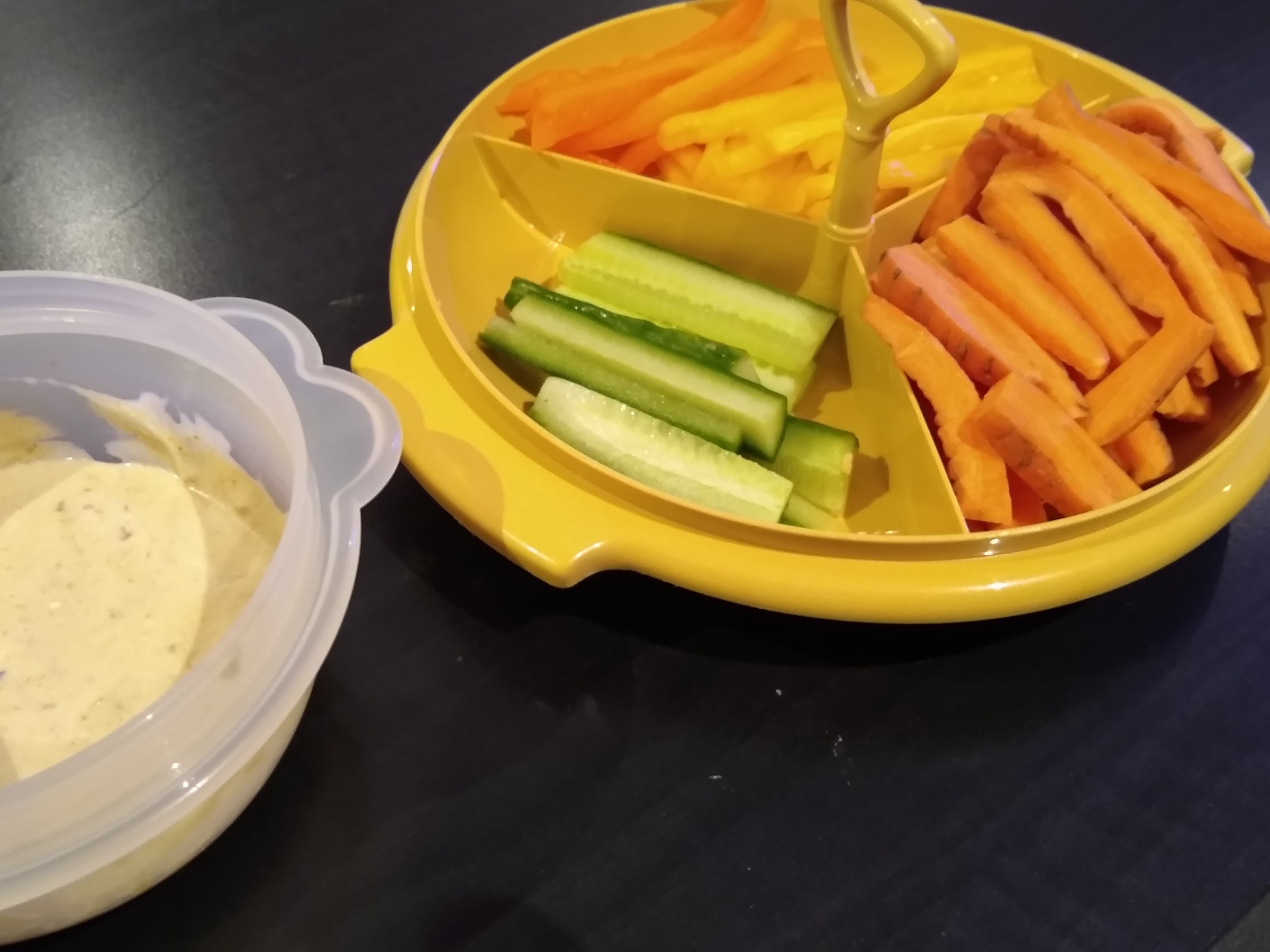 Ms. Waffle made the dough for the pigs in a blanket, found on the interwebs. She claims she knew it would be authentic given it called for margerine and not butter.  It turned out great, better than when she uses Pillsbury croissant dough. The piggies were Hygrade’s cocktail weiners. Served with ketchup, mustard, mayo. Boom!

We were ready for kickoff! I grabbed a plate of protein and sat down to enjoy the game.

Ms. Waffle made some Ganache Filled Chocolate Cupcakes with buttercream icing. She decided that orange was going to be the primary colour, no doubt showing her preference for Tom Brady and the Buccaneers over Patrick Mahomes and the Chiefs. That, and the fact that she had a bunch ready to be used from Mini-Waffle’s birthday cake. With a scoop of Coaticook’s vanilla ice cream, they were delicious.

We had a great party. Despite the game!

Kelsey’s is back with its famous Burger Battle, featuring creations from four of its Original Roadhouse locations across Canada.

There are four contenders this year: The Chip and Dip Burger, the Double Stacked Philly Burger, the Truck Stop Burger and the Mushroom Melter.

You can vote for your favourite burger and win burgers for a year!
I haven’t tried any of them, and I am not sure when I’ll be able to eat a burger at a restaurant again with the measures currently in place, but here are the contenders with my analysis of each concept:

So here is a Father’s Day Fiesta you may not want to miss, expecially if you have no idea what to get dad!

But, more interestingly, and more importantly, the Texas Grill will throw in a free hammock, Corona-branded of course. While supplies last!

What better to be reminded of the coronavirus than a Corona hammock? 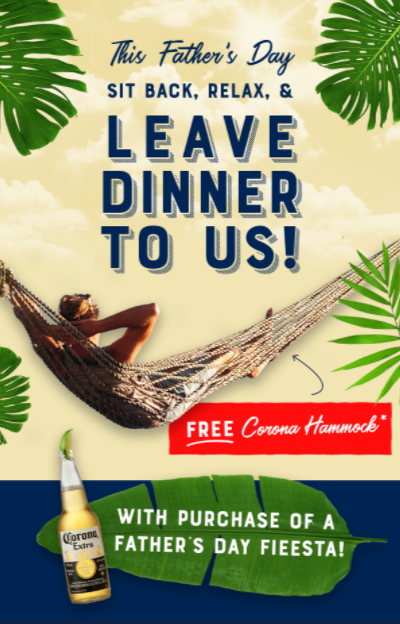 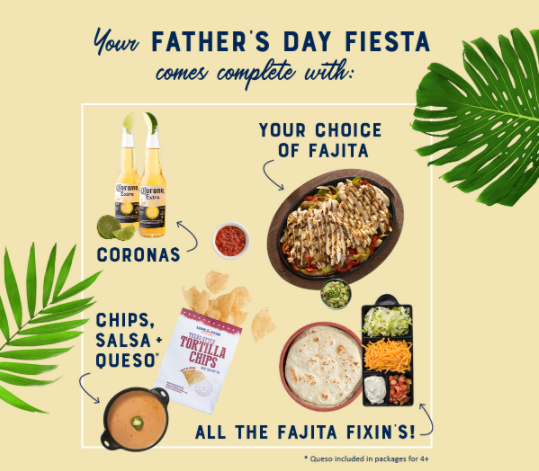 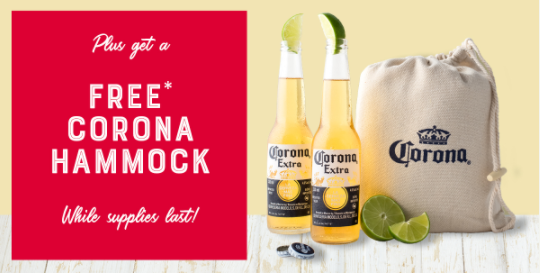 From May 8 to May 21, a portion of the proceeds from all McDonald’s fries sold will go to help support the Canadian Red Cross.

Money raised by Canadians as part of the Fries For Good initiative will go directly to the Canadian Red Cross, who will then divide the proceeds raised among various funds, including the Canadian Emergencies & COVID-19 Response Fund, the Nova Scotia Stronger Together Fund, and disaster response and preparedness work across Canada.

McDonald’s says that Fries for Good is an initiative that will also help Canadian potato farmers.

“Our agriculture partners have been hit hard by COVID-19, and we are continually looking for ways to support them as we navigate the new and unforeseen challenges of this pandemic,” said John Betts, President and CEO, McDonald’s Canada. “Canadian farmers are a driving force in our business and we hope Canadians’ love for our fries will allow us to not only make a significant donation to the Canadian Red Cross, but also reinforce our support for Canadian potato farmers while making a positive impact on their business.”